Dalit leader Jignesh Mevani, who kickstarted a crowdfunding campaign after announcing his candidature from Vadgam constituency in the poll-bound Gujarat, got a major shot in the arm after noted author and activist, Arundhati Roy donated Rs 3 lakh for his electioneering.

With this, the online campaign titled Janta Ki Ladai, Janta Ke Paison Se has so far raised 9,71,339 rupees with over 243 contributions. (supportjignesh.crowdnewsing.com).

“I contributed because I believe Jignesh Mevani represents a kind of breakthrough in mainstream Indian politics. A solidarity that rises from the bottom upwards.. one with vision, sophistication, confidence and a real, multi-faceted understanding of the direction we as a people need to move in.” Roy was quoted as saying at the campaign platform CrowdNewsing. 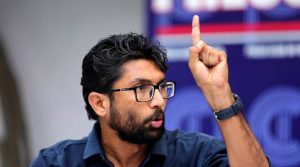 In a Facebook post on Thursday, Mevani thanked Roy for “her contribution to the movement”. He wrote:

“From the very beginning of the Una movement, we have not taken any contribution from political parties, corporates or NGOs. This movement belongs to the people and its their responsibility to run it and sustain it financially. In that respect we welcome contributions made by each of the 200 plus people. It doesn’t matter what amount you give, as long as you contribute.”

He also asserted that his political rivals have the resources but he wants to rise to people’s support.

Also Read: Gujarat polls draw near but transgenders in Surat yet to be allotted voter IDs

“Financially, the odds are against us, the enemy camp in power has immense backing not just from Indian corporations but global capital as well. But the people of India are responding and the fight is on,” said Mevani, who represents the Rashtriya Dalit Adhikar Manch and expecting to raise Rs 20 lacs from ordinary citizens.