The Narendra Modi government is considering to introduce a legislation to end instantaneous triple talaq in the upcoming winter session of Parliament. “We are likely to bring a legislation to provide shield and shelter to the victims suffering at the hands of their devious husbands,” Indian Express quoted a union minister as saying.

The government has set up a ministerial committee to frame a law, and the government is planning to bring this legislation in the upcoming session, PTI reported quoting  government functionaries.

As the law stands today, a victim of ‘talaq-e-biddat‘ would have no option but to approach the police for redressal of her grievance as a Muslim clergy would be of no assistance to her. Even police are helpless as no action can be taken against the husband in the absence of punitive provisions in the law, they explained. 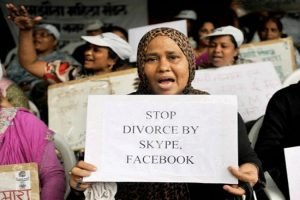 This comes two months after the Supreme Court struck down the controversial Islamic practice of instant divorce or ‘talaq- e-biddat’ as arbitrary and unconstitutional.

All India Muslim Personal Law is strongly opposed to any kind of interference in what it calls the personal matter of Islam. The board had expressed its disquiet over a flurry of pleas in the apex court seeking constitutional validity of triple talaq. The central government had told the apex court that it wants to put an end to the age-old practice and even posted a questionnaire whether the uniform civil code should be implemented in India. An Allahabad High Court judge last year described the practice as “monstrosity,” and added that triple talaq “is a cruel and most demeaning form of divorce.”

Also Read: Did Meena Kumari really go through Triple Talaq and Halala? The truth behind this viral social media post!