Today was a historic day for Indian Muslim women. The Supreme Court has ruled instant Triple Talaq (Talaq-e-Biddat) as unconstitutional and has given six months to the Narendra Modi Parliament to come up with a legislation to end Triple Talaq. Amid the string of congratulatory tweets and Facebook posts, there seems to be some misinformation floating around Meena Kumari. A few people have been claiming that the Pakeezah actress, who was a Muslim and whose original name was Mahjabeen Bano, had been given triple talaq by her husband and film director Kamal Amrohi.  The post in question also claims that following the alleged move, Amrohi wanted to get back with Meena Kumari. The post goes on to state that under the Islamic law, it is not possible for the divorced couple to get back without ‘Halala’. Perhaps it indicates to Nikah Halala – an Islamic practice which allows the divorcee woman to remarry her previous husband only after consummating the marriage with another man. The man with whom Meena Kumari apparently underwent Halala was actress Zeenat Aman’s father Amanullah Khan.

Khan was also the writer of Mughl-e-Azam and Meena Kumari’s swan-song Pakeezah.

The post quotes the famous tragedy queen as saying: “When I had to give my body to another man in the name of religion, what is the difference between me and a prostitute.”

Actress Meena Kumari too had to undergo Nikah Halala
She asked “What difference is left between me & a prostitute?#SexForNikah #TripleTalaq pic.twitter.com/j9PfIR5bCo

In fact, the social media post that’s going viral is a complete copy of a portion of the NDTV article.

It was Tripple talaq and Halala which killed the Indian tragedy queen Meena Kumari https://t.co/w47Tc60Pqh

When Meena Kumari was broken to pieces by the now redundant ‘triple talaq’ practice https://t.co/L4nFCJWo28

The #TripleTalaqVerdict brings to mind the tragic tale of #MeenaKumari.https://t.co/qrt2qFGZ99

Now, as tragic a story, going with the popular image of the actress, this may sound — but the question is whether it’s even true? Because none of these posts specify the source of either the facts stated in it or Meena Kumari’s quote indicting Islam.

Well, let’s look at this step by step.

The most basic place to begin a research is Wikipedia.

The Wikipedia page of Meena Kumari doesn’t say that she was divorced by her husband or that she endured a triple talaq. According to the Wikipedia page, she never formally separated from her husband but lived separately after several episodes of domestic discords and ego clashes.

We go on to look into some prominent articles written on this issue.

Kamal Amrohi’s daughter from his first marriage, Rukhsaar, who used to call Meena Kumari ‘choti Ammi’ has this to say: 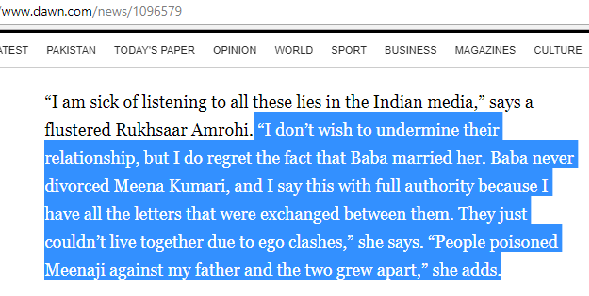 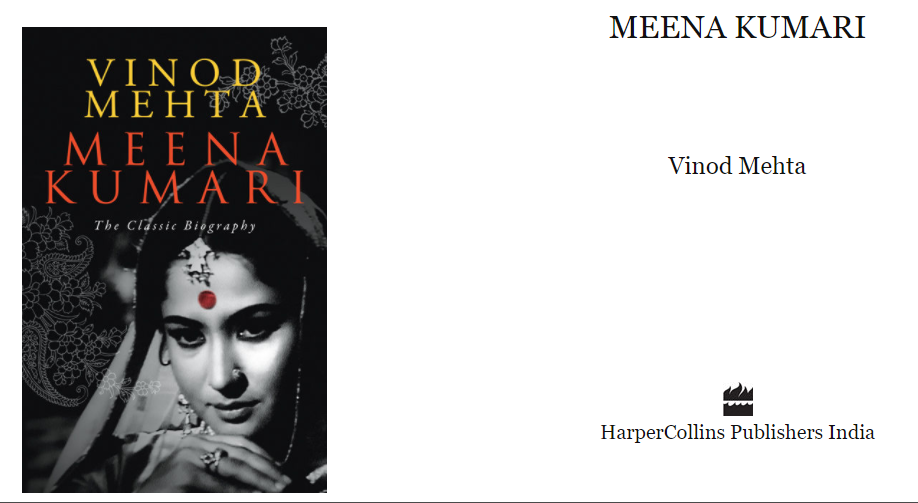 A large section of the book deals with Meera Kumari’s troubled marriage with Amrohi and her affair with Dharmendra. Mehta writes about the restrictions Amrohi placed on Meena Kumari’s shooting schedules, how he wanted her to be back home by 6:30 pm, didn’t allow any other man in her make up room and how he literally spied on her all the time – that made Meena Kumari feel suffocated at a time when she was at the top of her glamour and acting game. Disillusioned, she separated from her husband and found solace in the much married and younger actor Dharmendra.

In one chapter he writes:

“Dharmendra was a married man. He had a son and a simple wife. Meena was still officially Kamal Amrohi’s wife, so she wasn’t free either.”

However, according to the book, despite several problems, there is no mention of either “triple talaq” or even a formal divorce in the book. Amrohi and Meena Kumari teamed up again for Pakeezah, which her husband thought was his tribute to the beauty and talent of her beloved wife. According to the book, Amrohi was very much in love with Meena Kumari till the last days of her life.

So, it’s not clear where the material for this post is coming from? Or what is the source of Meena Kumari’s alleged quote:

“When I had to give my body to another man in the name of religion, what is the difference between me and a prostitute.”

Here’s a detailed Rajya Sabha documentary on her life which doesn’t talk about Triple Talaq:

While the idea behind this post was to buttress the notion of how oppressive a system Triple Talaq is, it is sad that social media enthusiasts and warriors have to resort to fake stories to gain on what is already established. Such posts, which are steeped in misinformation and lies, can never be well-meaning and must be busted.