Indians just love to roll! And word on the street is that Delhites and Mumbaikars are certified, potheads. Don’t be shocked just yet as these cities also happen to sell the cheapest pot in the world.

A study by Seedo, an Israel-based firm that sells devices to grow weed at home, ranked New Delhi as number three in the cities with the highest rates of weed consumption per year. The national capital stands next only to New York and Karachi, where cannabis (or weed) consumption is illegal. 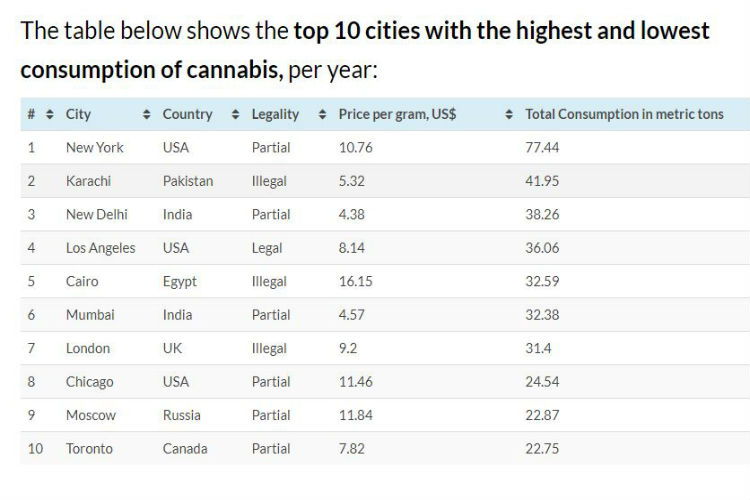 ALSO READ: Watch: We now know what happens when an atheist smokes weed with a Catholic priest and a Rabbi

In case you are wondering, for the purpose of this study, Seedo looked at the countries that consumed the least and the most weed annually. They prepared their final list of 120 cities by analysing if weed was legal, illegal or partially legal. Furthermore, prices per ounce per city were derived by combining crowd-sourced city-level surveys and World Drug Report 2017 by United Nations Office on Drugs and Crime.

In India, weed grows openly in the hilly regions and is easily accessible to the people. However, its cultivation and trade are partially restricted as it comes under the purview of Narcotic Drugs and Psychotropic Substances Act, 1985. While the Indian government allows the cultivation for industrial purposes, its illegal production can lead to jail for a term of up to 10 years. Its consumption can lead to a jail for a term of up to six months or a fine of Rs 10,000. So it might be cheap to buy, but not so much if you get caught high.