Weeks after the shocking deadly inferno at Kamala Mills Compound on December 29, five fire incidents were reported from different parts of Mumbai on Tuesday, January 9.

Adding to the string of such incidents, shortly after midnight, a fire erupted at a shop in a chawl in Mumbai’s Dockyard Road, Byculla. Six fire engines and water tankers were rushed to the spot and fortunately, no one was injured as firefighters doused the fire within two hours.

At 10 am, the fire brigade control room was alerted about yet another inferno in a three-storey residential apartment on Juhu Tara Road, Vile Parle. The fire was contained within 25 minutes. In another incident, a hotel at Dadar near Sarvodhay Bhavan went up in flames in the morning. 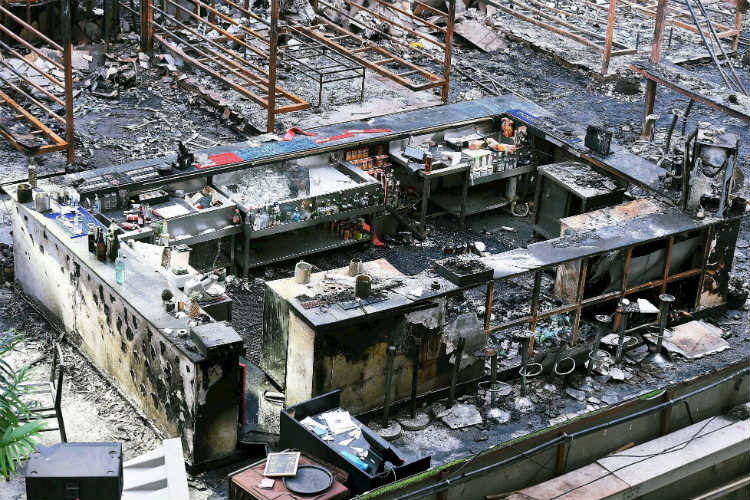 A view of the burnt down restaurant at Kamala Mills, in Mumbai on Saturday. (Courtesy: PTI/Shirish Shete)

A few hours later, a fire broke out in Koparkhairane. The incident was reported at 4 pm when a hut in Sector 12 D went up in flames and later engulfed seven other huts.

Later in the evening, a bamboo godown was engulfed in flames in Amboli Naka in Andheri (West). Six fire engines and six water tankers arrived at the spot and doused the fire in about two hours. The fire spread out to three neighbouring godowns, however, no casualties were reported.

Ever since the blaze at Kamala Mills Compound which claimed 14 lives, several incidents of fire have been reported from various parts of the city. On January 8, a fire broke at a Sessions Court building at 07:14 am, two days after the Cinevista Studios went up in flames during a TV serial shoot.