A man who masturbated in front of two girls in a Mumbai local has been arrested by the police after one of the girls shared the shocking incident on a blog. Her story went viral on the social media and one of the users tagged the railway minister Suresh Prabhu and the Divisional Railway Manager (DRM), Mumbai, who then directed the Railway Protection Force to take action.

As per a report in the Times of India, the man has been identified as Ashok Pradhan who was arrested within six hours after the story of the girl went viral on the social media. Pradhan hails from Bhubaneswar works as a mason and has confessed to the act.

The incident took place on June 29, when Isha Chitnis, a Mumbai resident and her friend boarded the Tapovan Express to reach Nashik. What happened next left the girls in utter disbelief. One of the girls recorded the whole act on the camera. When they narrated the whole story to a police man he said, “He (the pervert) might also a reservation, just find a seat somewhere else”.

After the shocking incident, Isha Chitnis wrote about it to the Ministry of Railway on Twitter but got no response. Isha Chitnis then wrote a blog on the Facebook and also posted the video on the social media which went viral. The police officer who did not take action when the girl reported has also been suspended.

Also Read: Man masturbates in front of a 22 year old girl; what the police helpline did will shock you to the core 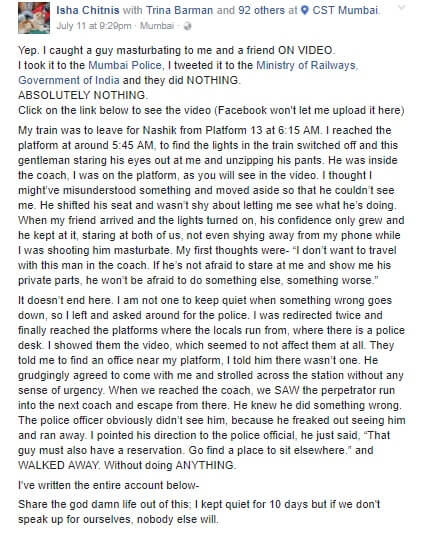 Recently also a similar incident happened when a 22-year-old woman identified as Pooja Nair came across a man who started abusing her and allegedly masturbated at her in a local train in presence of other women in the same compartment.