The 16-year-old Kashmiri girl who played wrestler Geeta Phogat’s childhood character, Zaira Wasim, had recently met Jammu and Kashmir Chief Minister Mehbooba Mufti but she was trolled so badly that she was compelled to write a post on Facebook seeking apology if her “recent actions or those she recently met” hurt anyone.

A few hours after her post surfaced on Facebook, the entire nation has gathered up over social media in her support. Even, the Commonwealth games Gold medalist wrestler Geeta Phogat herself backed Zaira and stated that there was no need to seek an apology and she need not be scared. While speaking to CNN-News18, Geeta said, “Zaira is a very good human being in real life too. She met the CM, not a terrorist. The entire nation is with her. Extremely upset that she was trolled for something like this.”

The athlete further told India Today, “If anything, Zaira Wasim is an excellent role model for the entire country. She needn’t apologise for anything.”

Zaira Wasim who issued an apology after receiving threats post her meeting with the J&K CM said that she had no idea why the matter had become such a big issue while adding that she had apologised only because she did not want hurt anyone’s feelings.

“Regarding my last post, I have no idea why this has become such a big issue. I just wanted to make sure that I did not hurt anyone’s feelings and all of a sudden it has been turned into national news,” Zaira said in a statement issued on Facebook account. 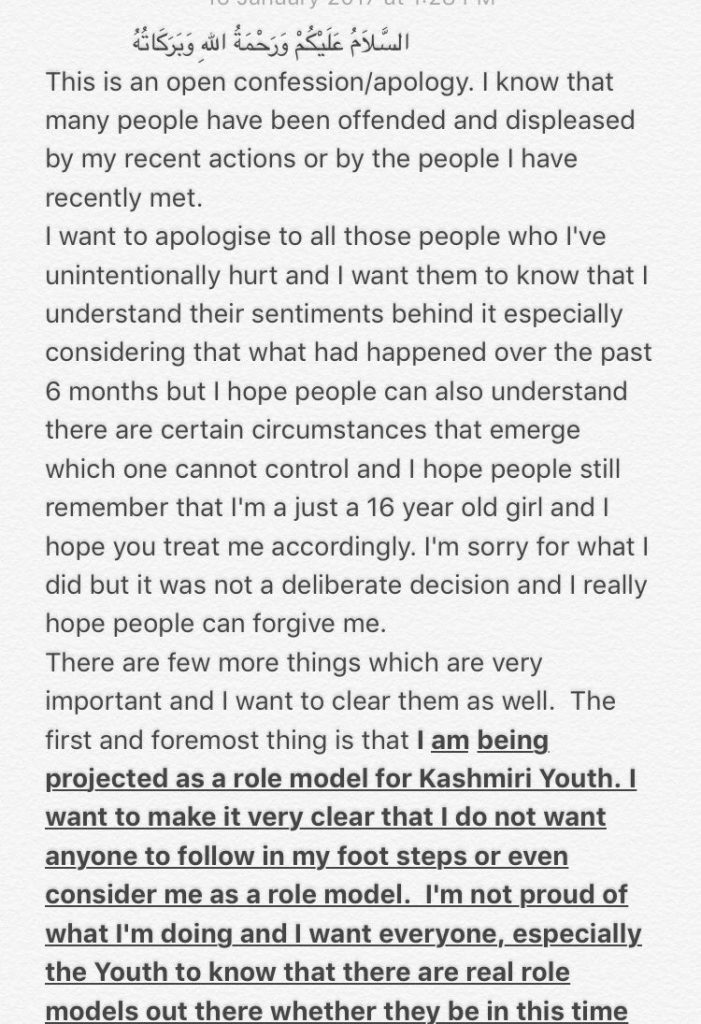 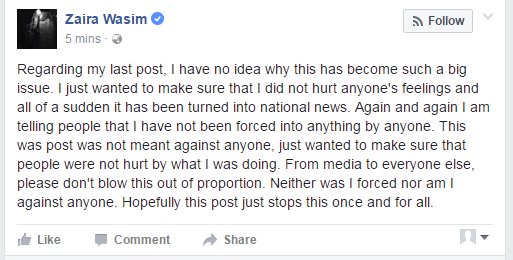 This post from Zaira has made numerous Twitteratis voice their opinions on social media:

What the hell? Dangal star @ZairaWasim puts out statement on twitter apologising for what she’s done & who she has met, seeks forgiveness: pic.twitter.com/mdKYYcZXLx

A 16 year old shouldn’t be forced to apologise & that too allegedly for meeting @MehboobaMufti. What are we coming to!!!!! https://t.co/MFz3ZKykV1

What a shame! Is she made to apologise for meeting the CM of her own state? https://t.co/DKi7mOZbgU

.@geeta_phogat tells @IndiaToday: If anything,@zairawasim is an excellent role model for the *entire* country.Needn’t apologise for anything

Shocking open letter by #Dangal actress @zairawasim apologizing for her work. Was she harassed and threatened by the extremists in #Kashmir? pic.twitter.com/cHl2HhkzA2