As opposed to the practice of covering the corpse in a Pakistani flag, the dead body of a terrorist in Kashmir was on Wednesday seen wrapped in the flag of the Islamic State terror group. There were hundreds of people who joined Sajad Gilkar funeral in Srinagar where flags with pictures of slain Hizbul Mujahideen commander Burhan Wani and his protege Zakir Rashid Bhat alias Musa were waved. Several women also joined Gilkar’s funeral procession where they were heard singing eulogies: “Qoam ay Bahaduro, Karyo goor gooro (Bravehearts of the nation, let me sing you a lullaby).”

Up till now, there have been many instances where bodies were seen wrapped in Pakistani flags. Sajad Gilkar who belonged to downtown Srinagar was killed along with two other Hizbul terrorists in an encounter on Wednesday. Gilkar is said to have played a key role in the lynching of DSP Mohammad Ayub Pandith on June 22. Funeral prayers for Gilkar were held in Jamia Masjid, the place where Pandith was lynched by a mob.

Ayub Pandhith was killed on June 22 when a furious mob attacked him in Nowhatta in Srinagar. Reports suggested that he allegedly opened fire at a group of people who caught him clicking pictures near the mosque. 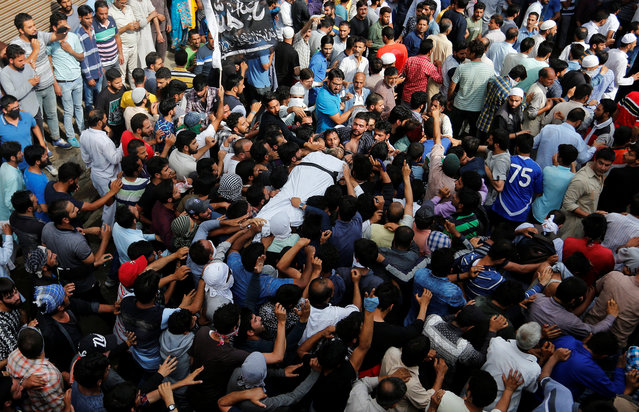 People carry the body of Sajad Ahmad Gilkar, who according to local media was killed in a gun battle with Indian security forces at the Radbugh Village of Budgam District, during his funeral in Srinagar July 12, 2017. (Photo: Reuters/Danish Ismail)

As per a report in the Times of India, Gilkar went underground after Pandhith’s lynching and then later joined Hizbul. Police have named Gilkar as an accused in Pandith’s lynching, but the Special Investigation Team is yet to submit its report. 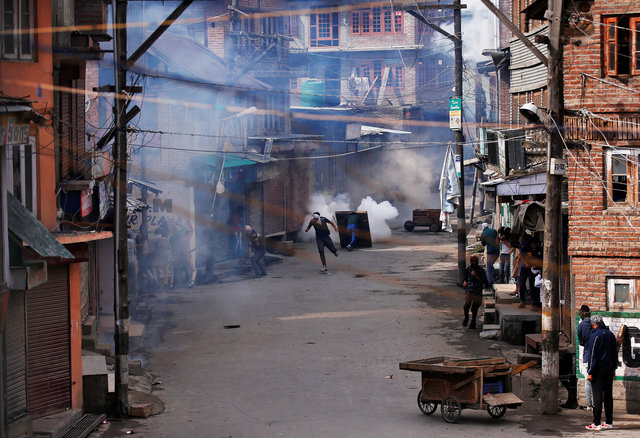 Masked demonstrators clash with the Indian police during a protest after the funeral of Sajad Ahmad Gilkar (Photo: /Danish Ismail)

He is also said to have been involved in several attacks on security officials like the grenade attacks on CRPF on April 2, 2017 at Nowhatta, CRPF camp Safa Kadal on June 11, 2017 and on a police party at Khanyar on April 30, 2017.