Snapchat founder Evan Spiegel had allegedly made some unpleasant comments which didn’t sit well with the Indians. A former employee had claimed that in 2015 Speigel had expressed that he didn’t want to “expand into poor countries like India and Spain”. And since the news was leaked by an American news agency last week, it has put him and the company at the receiving end of a social media ire.

However, the social media app is getting an overwhelming support in the restive Kashmir. The youth in Kashmir have turned into pro-Snapchat activists, stating that they will support Snapchat because it displeases Indians. 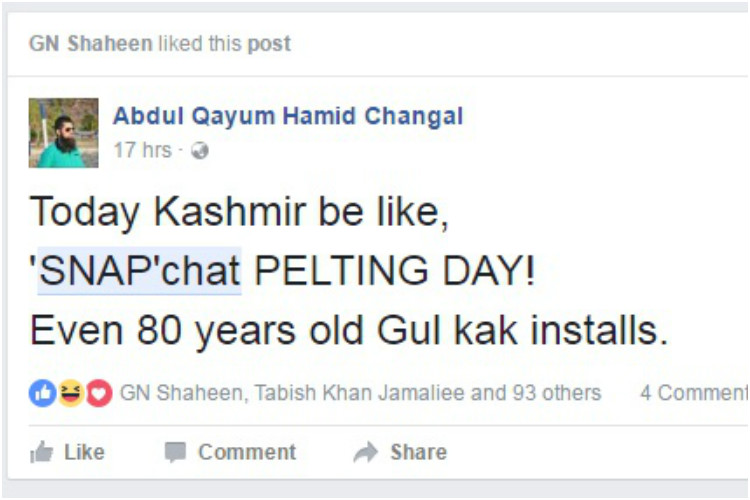 While, hashtag campaigns like #BoycottSnapchat and #UninstallSnapchat are trending elsewhere in the country, Kashmir is busy with counter-campaigns. Scores of people are downloading the messaging application, while many others are in all praise for Spiegel for having “cut India to size”. 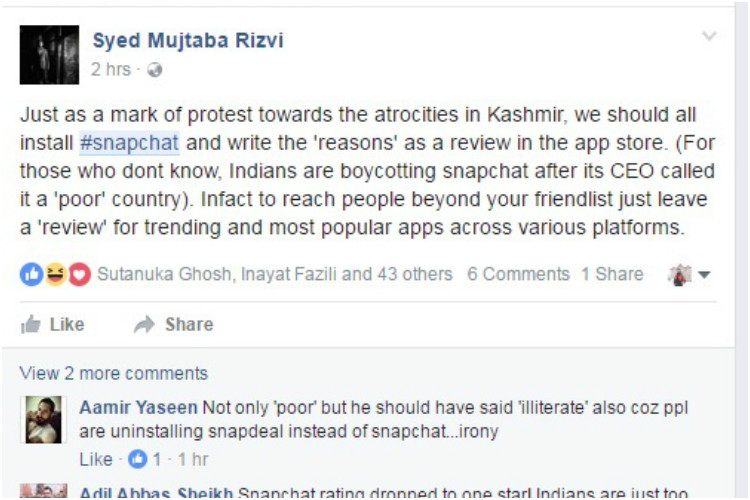 Interestingly, Snapchat isn’t very popular in Kashmir, but now people of the Valley have expressed that from now onwards they will prefer it over other similar messaging services. “I have Never Used #Snapchat before but after reading this news I am Going to install & use this ‘ Anti National ‘ App #MasskeSuratHindustanas(Shame India),” posted Musa Kashmiri on his Facebook wall.

Fazili Zabirah, a Kashmir University student, said that she finds Speigel a cute guy and posted his picture on facebook with a love emoticon and a caption of his Spiegel’s statements. 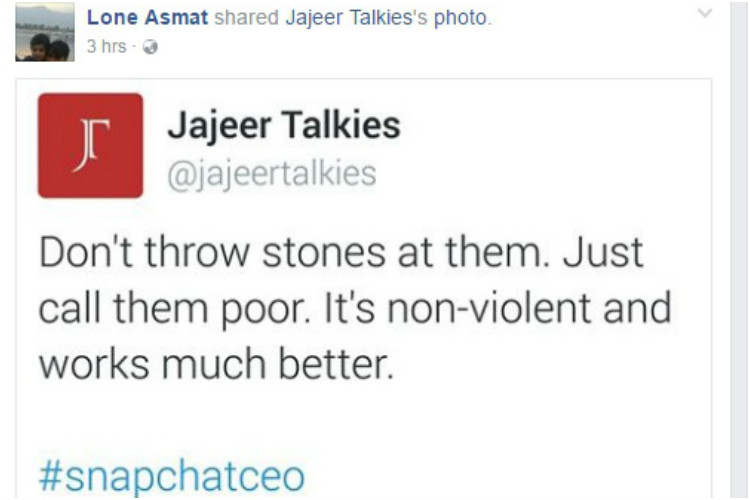 After the star-ratings of Snapchat reduced to one on Google Play Store, several WhatsApp users and groups in Kashmir circulated messages urging the “Kashmiri community” to support Snapchat by downloading the application on “each and every smartphone in Kashmir.” “I have downloaded the Snapchat and will try to use it more and more because frankly speaking, for we the oppressed people anything which pricks India is worth doing,” said Javaid Ahmed a youth from Batmaloo where a teenager was killed by forces on April 15.

Observers look at the pro-Snapchat sentiment in Kashmir as “clear sign of anger against the government.”  “See this counter-campaign vividly shows that Kashmiris are over-annoyed due to oppression and other rights abuse at the hands of the authority. Unless Kashmir is resolved, such developments will keep surprising the world,” a prominent business leader and Kashmir Economic Alliance Chairman, Muhammad Yasin Khan told InUth.