A 19-year-old boy from Kozhikode allegedly committed suicide after his class 12 certificates got damaged during the devastating Kerala floods. The boy, who has been identified as Kailash, had moved to a relief camp three days ago as the heavy downpour flooded their home in Karanthur, Kozhikode.

An excited Kailash had purchased a new set of clothes and saved some money after getting an admission in the Industrial Training Institute (ITI). However, when he returned home on Saturday as the water receded, he found his class 12 certificates damaged due to the flooding.

According to the police, when his parents returned home later that day to clean up the house, they found him hanging from the ceiling. 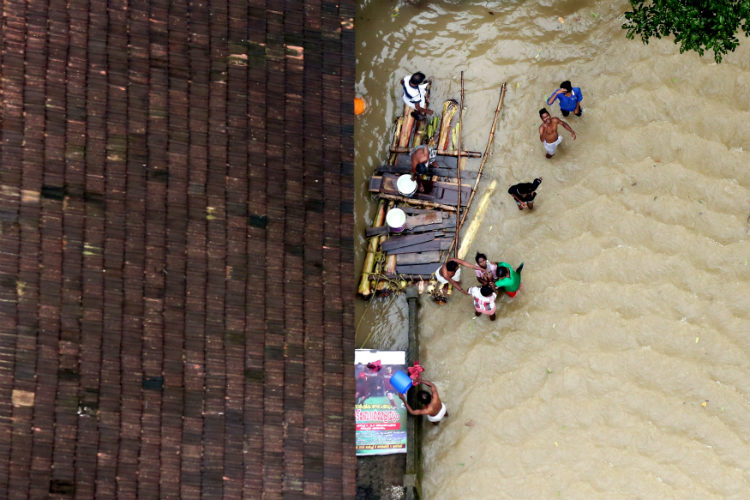 People wait for aid next to makeshift raft at a flooded area in the southern state of Kerala (Courtesy: REUTERS/Sivaram V)

The parents were shattered upon learning about their son’s demise. Kailash’s father, a labourer, had hinged his hopes of rebuilding on his son, as the floods had destroyed most of their belongings.

ALSO READ: This Man Got Fired In Gulf For Making ‘Insensitive’ Comments On Kerala Floods

In Chengannur, which was one of the worst-affected regions in the flood-hit state, a woman lost her all of her ID proofs and belongings, leaving her hopeless to ever reunite with her family. “All my belongings, my Aadhaar and Ration cards and ID proofs are all gone. Only I am alive. My relatives do not even know that I exist,” she mourned.

Since August 8, the torrential rains in Kerala have led to severe flooding across the state, forcing nine lakh people out of their homes and into relief camps. Over 200 have lost their lives in the worst-ever floods the state has witnessed in a century.