Neetu Sarkar’s journey from a vulnerable child bride to an international wrestler is nothing less than extra-ordinary.  At 13, she was married off to a 43-year -old man in her home village of Bhiwani.  The ill-treatment of her in-laws forced Neetu to run away just after three days of her marriage- a move that angered her parents.

She was quickly married off to another husband. By the age of 14, she gave birth to twin sons. However, her troubles did not end there. Neetu’s husband was jobless and her family was totally dependent on mother-in-law’s pension which made it difficult to make their ends meet.

Fuelled by the desire to beat poverty, she decided to become a woman wrestler.  “Initially, my folks wouldn’t let me [fight]. I used to wear a dress while wrestling. “I really wanted to wrestle. Then they got me married. Then I had children. Whenever I’d see another girl wrestle, I’d feel curious. I would ask, what game is this? What are you playing? I became a mother at 14 and the family’s financial condition didn’t allow me to think about sport for the next two-three years.” she had told Hindustan Times. 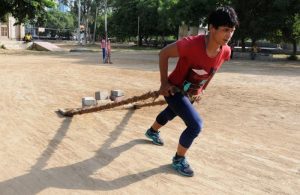 But the journey was not easy. People in the village dissuaded her from pursuing wrestling, however, she found support in her husband.

“People would advise my husband not to let me wrestle. But my husband would support me,” she said. “He would say, ‘You don’t even have to win; I don’t want your medal or victory. I just want you to work hard. I want you to pursue your passion.’”

She got up at 3 am in the morning, reaching the training ground in Rohtak at 5.30 am and then going through gruelling workout sessions till late into the night. Neetu has developed herself into a wrestler of international repute.

She won a silver medal at the Indian National Games earlier this year. She has also proudly represented India in the Junior World Championships in Brazil.