Wangchuk,whose life inspired Aamir Khan’s character Phunsukh Wangdu in 3 Idiots, is the founding-director of the Students’ Educational and Cultural Movement of Ladakh (SECMOL), an organisation that aims to reform the educational system of Ladakh. He has also designed SECMOL’s campus that runs solely on solar energy and uses no fossil fuels for cooking, lighting, or heating. It also nurtures the cultural heritage of Leh Ladakh.

Wangchuk played a key role in the launch of Operation New Hope in 1994, a collaboration of government, village communities and the civil society to bring reforms in the government school system. He is also credited with the invention of the Ice Stupa technique that creates artificial glaciers, used for storing winter water in form of conical shaped ice heap.

We proudly present to the world the latest recipients of Asia’s Premier Prize and Highest Honor: the 2018 Ramon Magsaysay Awardees!

He has received several awards and recognition over the years for his exemplary work, including the State Award for outstanding environmentalist by J&K government (2016), Global Award for Sustainable Architecture (2017) and Rolex Awards for Enterprise.

Bharat Vatwani, the Mumbai based psychiatrist along with his wife Smitha Vatwani, runs Shraddha Rehabilitation Foundation, an NGO that has been instrumental in the rescue of thousands of mentally ill people and helped them reunite with their families. Vatwani founded the NGO wayback in 1989 while he came across a mentally ill young man who was drinking dirty water from the roadside gutter. 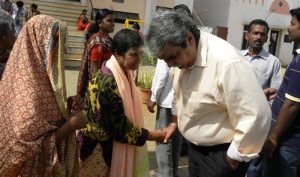 “I was so moved by the plight of this boy that I decided to take care of him. After treating the boy, I was shocked to learn of his identity. He was a BSc graduate with a diploma in medical laboratory technology and his father was a superintendent in Andhra Pradesh,” Vatwani had told Indian Express.

The awards, named after a Philippine president Ramon Magsaysay who died in a plane crash in 1957 is given in recognition of exemplary social service.