Speaking to the daily, Wangchuk said that a prototype has been successfully built and the army has shown interest in at least 10,000 such structures.

Additionally, it will reduce pollution caused by the massive amounts of oil the Army consumes to keep the jawans warm, he added.

Meanwhile, Wangchuk is planning to set up a plant in Ladakh under the Alternative Mountain University, which the techie is in the process of setting up.

“Materials will be fabricated in the plant for a whole year and assembled on the spot in summer when the weather is fine. One hut will take just two weeks to be set up,” he said. 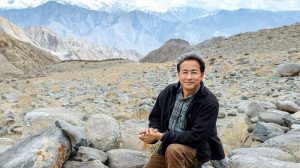 Notably, these are movable, prefabricated and can be assembled on the spot and give solutions to meet the Army’s shelter requirements. The cost of heating will be zero.

Wangchuk is the founding-director of the Students’ Educational and Cultural Movement of Ladakh (SECMOL), an organisation that aims to reform the educational system of Ladakh. He has also designed SECMOL’s campus that runs solely on solar energy. He has received several awards and recognition over the years for his exemplary work, including the State Award for outstanding environmentalist by J&K government (2016), Global Award for Sustainable Architecture (2017) and Rolex Awards for Enterprise.