Street dogs in Coimbatore are being caught and taken to government-run dog shelters, as local authorities ready the city for Prime Minister Narendra Modi’s visit on Shivratri on Friday. A report in Chennai’s New Indian Express said that the dog-catching drive began on Wednesday, and 24 dogs living en route from airport to the venue that’d host the PM had been caught by Thursday night.

According to the English daily, a local non-profit was carrying out the drive at the orders of the district administration.

District Animal Welfare Officer Kalpana Vasudevan was quoted by the NIE, “Our four dog catchers are working from morning to evening to catch the dogs and keep them safe at the Corporation’s dog shelter in Ukkadam.”

Vasudevan also heads a animal welfare non-profit, People for Animals Coimbatore Unit 2. She was reported saying that her NGO was using its van for dog-catching, while the corporation vehicle would be deputed for the purpose not until Friday morning.

Vasudevan was quoted as saying, “We will be given the corporation vehicle also on Friday before the Prime Minister’s arrival. Both the vehicles will be on standby till he leaves.”

According to the report, the dogs will be released back on streets on Monday morning. The PM is scheduled to be at the Isha Foundation for two hours before flying out of Coimbatore. Modi will inaugurate a 112-foot statue of Shiva at the Isha Foundation, run by a spiritual guru Jaggi Vasdev. 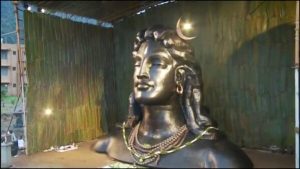 This Shiva bust was inaugurated at the Isha Foundation in 2014. The picture above shows before the statue was placed out in the open.

During the dogs’ stay at the shelter, they will reportedly be fed and be served by a staff of two cooks and cleaners, a couple of para-veterinary workers and veterinarians each.

The 112-feet statue at the Isha Foundation has reportedly caused concerns among environmental and tribal activists, who have accused the spiritual centre of violating laws and causing damage to the “pristine ecology” of the Western Ghats during its building. The security in Coimbatore has been beefed up in anticipation of protests by these groups at the time of Modi’s visit.