Jawaharlal Nehru University (JNU) has cancelled an event where BJP MP Subramanian Swamy was expected to talk on Ram Mandir issue on Wednesday on the varsity’s campus.

The seminar titled “Why Ram Temple in Ayodhya” was scheduled at university’s Koyna hostel at 9:30 pm on 6 December 2017, which happens to be the 25th anniversary of Babri Masjid demolition.

In a note, warden of Koyna Hostel said that “competent authority has decided that no talk will take place in the hostel. Hence the event has been cancelled.”

The event was reportedly organised by Vivekananda Vichar Manch, a right-leaning group comprising of students from the university.

Reacting to the development, BJP MP Subramanian Swamy told a private news Channel:”I am not surprised. JNU is fearful that my ideas will influence the youth. The Left is threatened by my arguments. My arguments on Ram Mandir are so powerful that they won’t be able to stand it.”

Speaking with inuth.com, former JNU students’ leader Umar Khalid said: “It is for the administration to answer why they red-flagged the event. As far as our ideologies are concerned, Swamy has full freedom to express his views and we have the freedom to oppose them.” 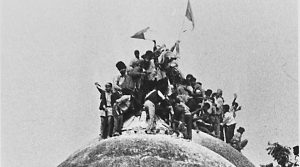 When told that even Prakash Karat’s event has been called off, he said, seemingly it’s a ploy to cancel Karat’s event.

“I believe that the administration just wanted to cancel Karat’s event as neither student unions nor left parties was opposed to Swamy’s event. First administration granted permission for the event then they cancelled it.”

He also reacted to Swamy’s comments that left is threatened by his arguments saying ” Mr Swamy is a funny person, he should not be taken seriously.”

The organisers also expressed surprise over varsity’s move. “There was no such problem earlier, we had sent out the invite and it was all finalized. Suddenly, the administration showed its anti-Ram and anti-Hindu face,” ABVP member Raghvendra Mishra told News18.

The other event where CPI(M) politburo member Prakash Karat was expected to speak was scheduled for 9:30 pm at Sabarmati Mess. However, after the furore over the cancellation of Swamy’s talk, the second event was also called off.