From January 2018 onwards, the students at Jawaharlal Nehru University will be required to fulfill a minimum attendance criteria. A circular issued on December 22 stated that attendance was mandatory for all students registered in all programmes from the winter semester 2018, Hindustan Times reported.

Notedly, this is the first time the university will record the number of classes attended by each student. The varsity’s move has not gone down well with a section of students who allege that the decision has been taken without consulting their representatives. They also added that making attendance mandatory was against the university’s tradition.

The circular also mentions that the proposal to make attendance mandatory was approved in the academic council meet held on December 1. However, JNUSU said that no decision in this regard was reached in the meeting.

“Attendance was not discussed in the academic council meeting with students or teachers, it was not even on the agenda. The vice-chancellor had mentioned something about this saying they would do it but no firm decision had been made,” Hindustan Times quoted JNU Students Union (JNUSU) Vice-President Simone Zoya Khan as saying.

Calling the varsity’s diktat an attack on the way JNU has traditionally functioned, she also added that the student body would not recognise it. 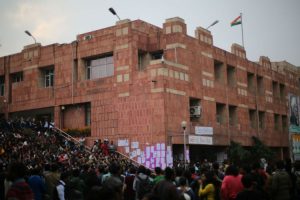 “Students have attended classes in JNU regularly in the past not because the rule of attendance was thrust on us. We did it because we wanted to. So, we are not even going to talk of the inconveniences this will cause,” she added.

JNUSU president Geeta Kumari also lambasted the varsity’s move, saying that as the university focused primarily on research, it was “unreasonable” and “unnecessary” to set attendance criteria for MPhil and PhD students when they allegedly do not have regular classes.

The university is yet to specify the exact percentage of attendance that would be required to be maintained by students.