Yet again, girls have overshadowed boys in most of the exam results declared recently. Kolkata girl Ananya Maity emerged as the class XII topper for ISC while Pune’s Muskan Abdulla Pathan topped the ICSE class X exams. In CBSE too, Raksha Gopal topped Class 12th exams. Close on heels of these results, the All India Institute of Medical Sciences (AIIMS) declared the score in which Nishita Purohit has bagged the top most rank in the medical exam, that too in her first attempt.

Who are these toppers?

Ananya Maity: She has scored 99.5% in class XII in ISC and wants to study psychology in college. She loves writing and is also a pianist. She has also won awards for poetry writing and her short story has also been published.

Raksha Gopal: CBSE 12th topper Raksha is a keyboard player and loves reading. The 17-year-old is learning French and has a keen interest in Political Science.

Muskan Abdullah Pathan: A swimmer and a badminton player, Muskan wants to pursue a career in medicine. Though elated by the results, she says that she wasn’t even in top 5 till class 8th.

Taking nothing away from these champions, the results of girls doing better than boys is nothing new. In fact, ‘Girls outshine boys’ has become one of the cliches after exam results. In most of the exams in the past years including ICSE, CBSE exams, girls have been bagging the top rank.

As per a study by American Psychological Association in 2014 too, the phenomenon of girls doing better than boys is not new. “Girls didn’t all of a sudden become more engaged and boys didn’t suddenly become more rambunctious. Their attitudes toward learning were always this way. But it didn’t show up in educational attainment like it does today because of all the factors that previously discouraged women’s participation in the labor force, such as a lack of access to reliable birth control,” Christopher Cornwell, one of the authors of the study stated.

What is more pressing is the fact that such results are not limited to just India but in most of the other countries too. Studies also suggest that contrary to popular belief, girls are doing better in science and maths subjects too. American Psychological Association adds:

Speaking about this disparity, questions have often been raised over whether there is a need for more male teachers as opposed to the current state where there are more females teaching in school and elementary level.

A study by Pew Research Center has also hinted that females are enrolling themselves more in colleges when compared to boys.

Some Quora users have also argued on the topic quoting studies which suggest why girls are better than boys in schools adding that school curriculum also plays to the strengths of girls rather than of boys. But most agree that girls are more organised and disciplined than boys which play a key role in the results that they have been getting in exams. 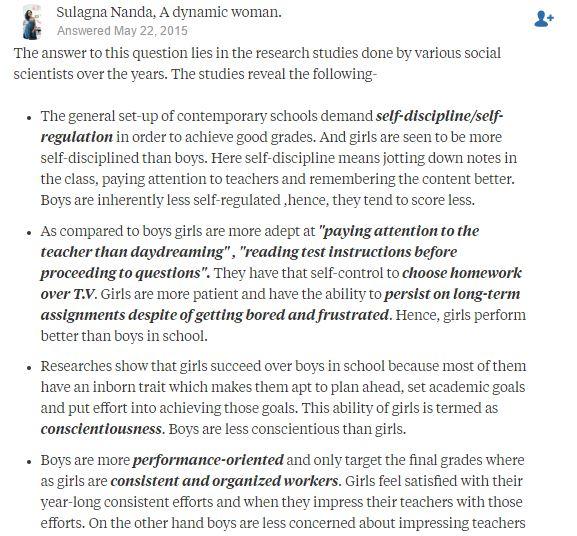 Some in jest, some seriously, social media users have often commented that since boys also focus on sports and other activities the results are lopsided in the favour of girls.

Also one of the key questions is that though girls do better in exams, their representation in workforce remains limited. There are studies which reveal that there is limited representation on higher positions as they end up taking breaks due to marriage or family commitments.

So while we congratulate the girls who have outperformed their counterparts and made a mark for themselves, let’s also hope that these toppers lead the way to a more balanced workplace and equal opportunities for men and women in the future.