Omprakash Mishra’s Bol Naa Aunty Aaun Kya? has joined the team of cringe-worthy music on social media. The ‘rap-king’, made this song in 2015, but recently this song gained immense popularity. The video amassed 3,000,000 hits, 30,000 likes, and 60,000 dislikes, but it was taken down by YouTube when many pointed out the song promoted sexism and nothing else. The fans of this self-acclaimed rockstar decided to avenge this and issued rape threats to 24-year-journalist who had called out the video for being misogynistic.

As it happened, news portal The Quint asked Internet users on 13 Septemeber to report the song, forcing YouTube to take it down. Soon after this fans of Mishra, took to Quint to criticise their action. Mishra himself was no different than his fans and he asked them to ‘Report Quint Neon’. No one would have thought that pointing out a sick mentality would create problems for the journalist Deeksha Sharma.

The young journalist started receiving rape threats on WhatsApp. The gist of one of the messages she shared on social media, was that Deeksha should not forget what happened to Gauri Lankesh, the senior journalist was shot outside her home.  Deeksha told a leading daily, she was targeted because of her gender:

None of us thought that we’d received so much hate. In some way, it’s all proving the point in my video but no, didn’t expect this at all 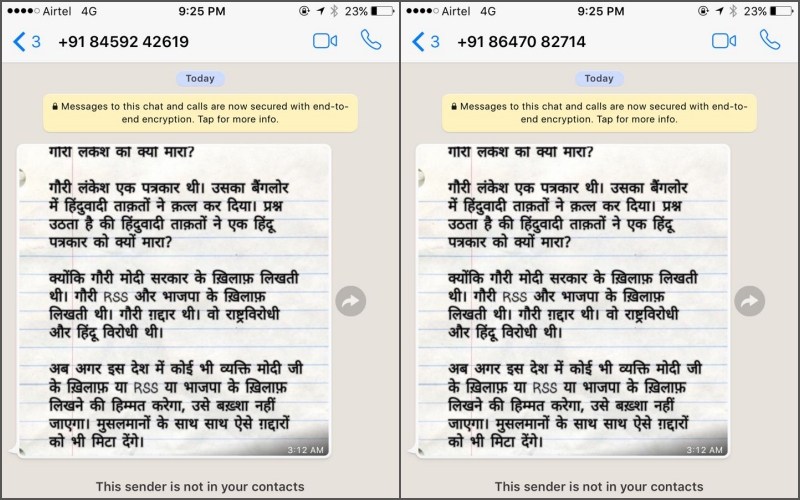 Here is the police complaint filed by Quint: 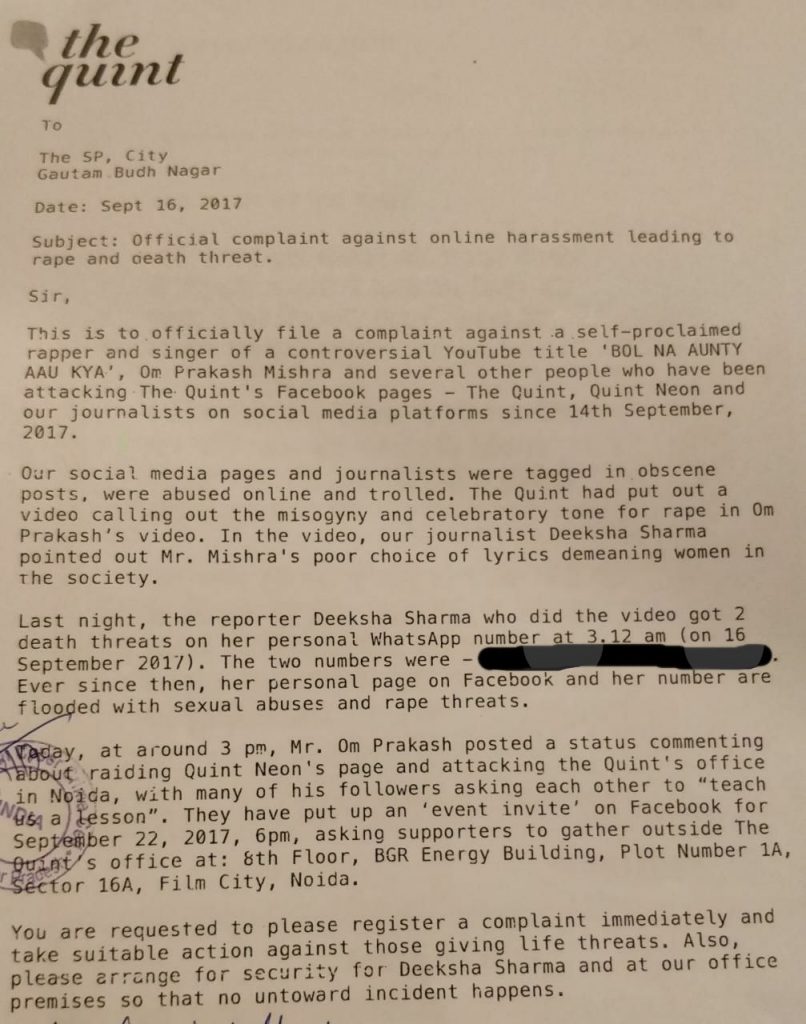 After the journalist was threatened, the web portal took down the video since they did not want problems for their brave journalist:

Fans of Omprakash Mishra coming out with such hatred against the journalist is unacceptable. In case you are unaware, on 11 September hundreds of young people gathered in CP, NEw Delhi to shout the misogynistic lyrics, “Bol Naa Aunty AAun Kya?” The event in Delhi was organised by a Facebook page called Shit Indians Say and even the admin was surprised at the turnout.  Kyle Fernandes. the admin told a daily:

It was supposed to be sarcastic. But 100 people turned up, and when they started chanting and walking around Connaught Place, other people joined them and the numbers increased to 500. I never thought so many would actually turn up

Soon there were announcements that similar events will be taking place in Mumbai, Bangalore among others. But the events were cancelled, probably after many media houses criticised it. Ankit Shah, host of the Mumbai event said:

It was supposed to be a spoof page, like the ‘Everybody Point their Fans at the Hurricane to Blow it Away’ event. It was meant to be for laughs, even the first few people who ticked ‘Going’ for the page, did it for fun. We thought just a few would get together just for laughs. The rapper Omprakash Mishra also called and said he is coming. Once we realised that so many people might actually turn up, like in Delhi, we cancelled the event

Bengaluru Police stepped in and said they would not allow any events which promote sexism, and if anything like this takes place they would take strict action against the organisers.

Also read: Someone filled in Judwaa 2’s plot on Wikipedia and it is a total cringefest

As pointed out by a daily, the followers of Omprakash Mehra are as sexist as him. And nothing gives them the right to threaten journalists.