What happened on the sets of The Great Indian Laughter Challenge has stirred a new debate. Akshay Kumar’s remark on Mallika Dua has been called insensitive, sexist, and in utterly bad taste by netizens. Some of the social media users feel the whole episode should be treated as a joke, while some are blatantly blaming Mallika for making an issue out of it. With so much being said and discussed on the matter, everyone seems to be missing the biggest point here – Akshay Kumar should apologise. Period.

First things first, the lady in question was hurt.

The superstar’s tasteless joke, “Mallika ji aap bell bajao, main aapko bajata hoon”, (irrespective of what he meant or didn’t) did hurt Mallika. Her acceptance of the fact makes it even more important for Akshay to apologise. But sadly, the dynamics in this episode too have changed to victim-shaming.

Mallika’s character is under unwarranted scrutiny.

Trolls or let’s say Akshay Kumar fans (who for some reason do not understand the sexism in the actor’s remark) have dug out Mallika’s old AIB video to question her morality. 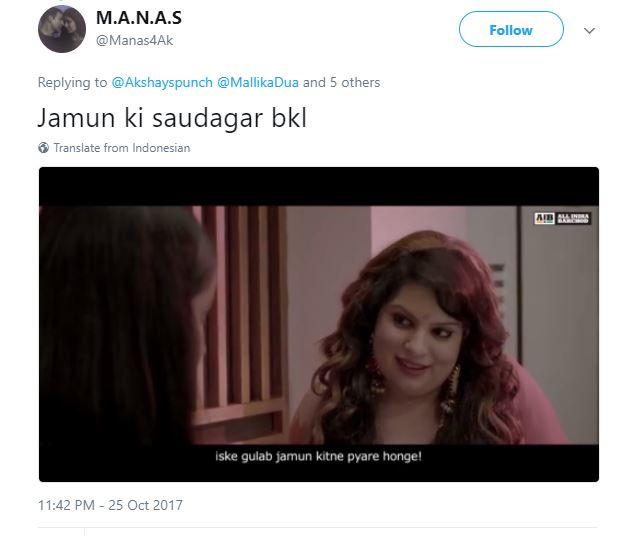 The aforementioned picture of Mallika is from an All India Bakchod video titled, If People Were Apps in which she essayed the character of Tinder Aunty. In the video, Mallika’s character took it upon herself to ensure the girl on whose phone she was installed got into a relationship and even established a physical relationship with someone.

For most of us, this was just another quirky character played by Mallika and there was nothing to read between the lines. But, hold on, for the trolls, this video was something that substantiated her morality and character. 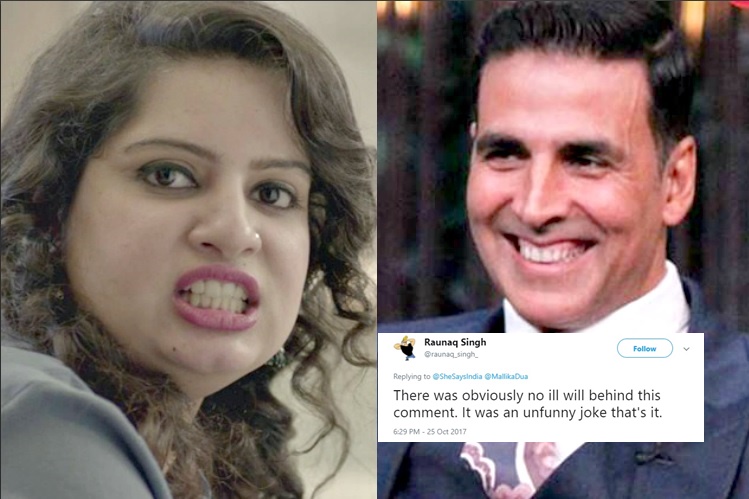 Mallika could not take that she was sacked.

Another argument against Mallika is that she expressed her concern over the remark ONLY after she was asked to leave The Great Indian Laughter Challenge. Reportedly, Mallika Dua and her fellow mentors Zakir Khan and Hussain Dalal were sacked from the reality TV show because of low TRPs.

Sources from Star Plus, while speaking to a leading daily, they said,

The clip belongs to the first episode, and if Mallika had a problem with it why didn’t she raise the alarm right then? She continued to shoot with Akshay for further episodes, and they got along well.

While Akshay Kumar’s fans on social media have launched a war against Mallika to ensure she is ‘shown her place’, the incessant trolling Mallika is going through makes it really important for Akshay to speak up.

The superstar has been a champion of women’s rights and has been vocal about any kind of misbehaviour against women in the past. 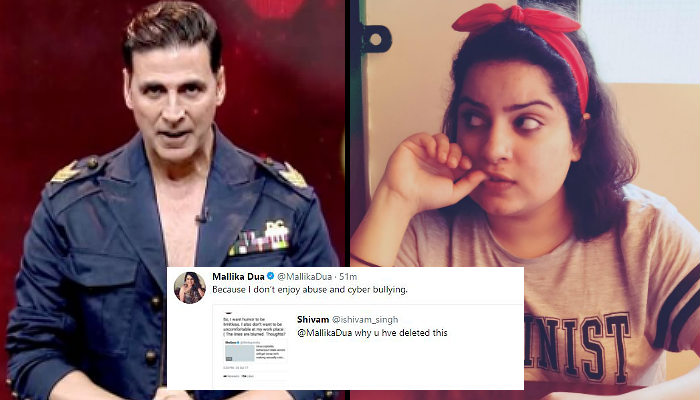 The incident makes me feel we are evolving backwards, from humans to animals, rather beasts because even animals are better!’

While Akshay talks about women empowerment and asks them to not bow down to anyone, his remark on Mallika is downright sexist. By apologising to a former colleague for crossing the line in the name of comedy, Akshay will set an example for everyone and a tight slap on trolls who can not look beyond victim-blaming.

Dear Akshay, show us you are the real Khiladi!