Mallika Dua has been facing a lot of criticism and trolling on social media, after she tweeted this – “So, I want humor to be limitless. I also don’t want to be uncomfortable at my work place 🙁 The lines are blurred. Thoughts?”, following Akshay’s joke on her in The Great Indian Laughter Challenge. The comedian claimed that Akshay’s joke was in bad taste. Even Mallika’s father Vinod Dua slammed Akshay for his insensitive remark and said he would take action against him.

In one of the episodes of the reality TV show, Akshay Kumar apparently said this to Mallika Dua,

Soon after her tweets made it to the headlines, Mallika deleted it. But, clarifying this, the internet sensation has revealed that the incessant trolling was the reason she made her Twitter account private.

In a series of tweets, Mallika slammed all those who were questioning her after the tweet went viral.

Addressing reports that were floating around, Mallika tweeted: 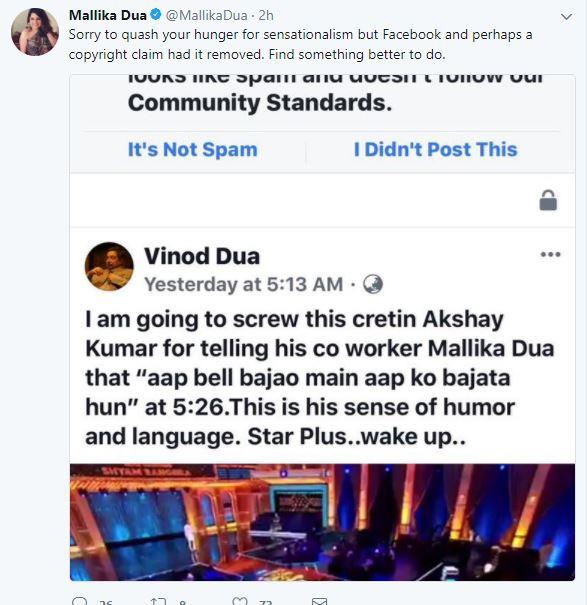 After this Mallika took it upon herself to educate the trolls that they were messing with the wrong person. Here are her tweets:

Also read: Comedians Mallika Dua, Biswa Kalyan Rath and others talk about depression, have a message for youngsters

Dear trolls, this girl is not bowing down to you!