Recently, Bollywood actor, Akshay Kumar, who is judging the Star Plus’ show, The Great Indian Laughter Challenge, is in the news for making a deeply insensitive and sexist remark about Mallika Dua, who’s one of the mentors. What Akshay Kumar said to Mallika was, undoubtedly, sexist but as is a norm in India (and elsewhere), for some it was ‘just a joke’ and there’s no need to make an ‘issue’ of it. This has started a debate on Twitter and obviously, terms like feminism are being used again, (incorrectly, of course) with people shamelessly pointing fingers at Dua.

To give you the context, The Great Indian Laughter Challenge requires the judges and the mentors to ring a huge bell hanging over a raised platform if they like a contestant. So when Mallika climbed up to ring the bell for a contestant, Akshay Kumar is heard saying: “Mallika Ji aap bell bajao, main aapko bajata hoon.”

Which, according to his fans, is his idea of a joke and a ‘light-hearted’ comment.

Mallika Dua’s father and veteran journalist, Vinod Dua took to Facebook to express his displeasure and wrote, “I am going to screw this cretin Akshay Kumar for telling his co-worker Mallika Dua that “aap bell bajao main aap ko bajata hun” at 5:26. This is his sense of humor and language.”

All this comes after a week of the vigorous #MeToo campaign where women (as well as men) came out in solidarity, made themselves heard and shared their stories of sexual harassment. ‘She Says’, which describes itself on Twitter as a ‘youth-led movement to end gender discrimination and further the rights of women’, posted a tweet with the video clip.

Unacceptable behaviour! Male actors still get away with making sexually colored remarks under the guise of ‘comedy’. #MeToo @MallikaDua pic.twitter.com/IwZLS9XQMB

This started a debate and some of the responses on the thread are quite disturbing:

remember deepika’s my choice video of talking abt sex outside marriage! had the same words used by any man…then imagine

And not to forget, she is out of the show. Remember what zuber did when eliminated from Bigg Boss. Frustration speaks.

This is u, right?
U r kicked out from the show. Now u r seeking for public’s attention by @akshaykumar name. Shameless. pic.twitter.com/8EbCoSfahg

Akshay kumar is most humble man in industry.it was just a sense of humour

What u r doing in AIB viDeos in the name of comedy? Use filth as comedy ?

There was obviously no ill will behind this comment. It was an unfunny joke that’s it. 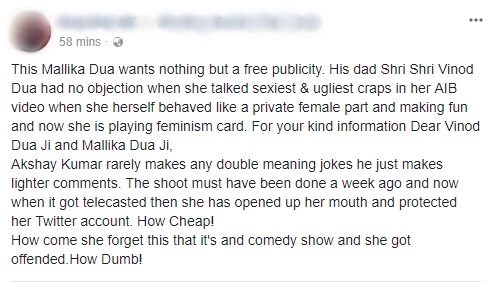 Then, there were some sane voices as well:

If that statement made @MallikaDua feel uncomfortable, it is not “choti baat” and feminists batangadh nahi bana rahe.

When @akshaykumar acted out tailor-actress sexual harassment scene with Rohit Shetty it was a trigger #metoo talk about a sexist workplace!

@akshaykumar I respected you so much…

Well, To be honest i want to know what @mrsfunnybones has to say on this…
Coz This is real shit like Akshay Kumar’s movies…