Clearing the air around his health, actor Irrfan Khan today shared a social media post saying he has been diagnosed with neuroendocrine tumour.

The actor wrote, “The unexpected makes us grow, which is what the past few days have been about. Learning that I have been diagnosed with NeuroEndocrine Tumour as of now has admittedly been difficult, but the love and strength of those around me and that I found within me has brought me to a place of hope. The journey of this is taking me out of the country, and I request everyone to contribute sending their wishes. As for the rumours that were floated Neuro is not always about the brain and googling is the easiest way to do research. To those who waited for my words, I hope to be back with more stories.” 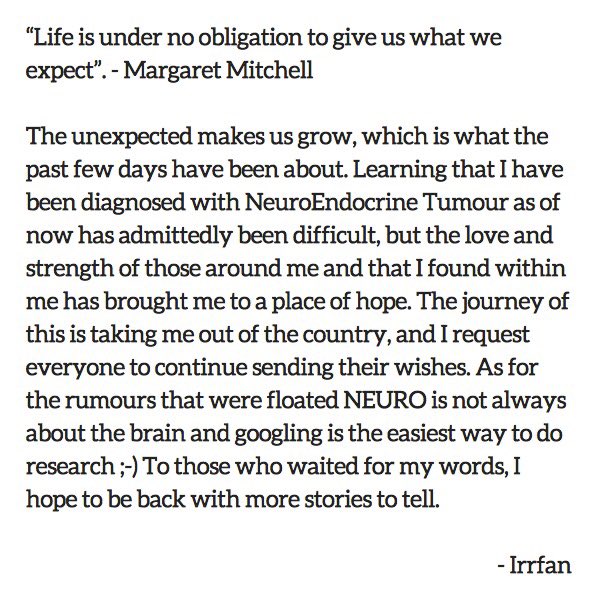 Indeed, neuroendocrine tumour is not related to the brain. It’s an ailment that usually afflicts intestine, pancreas or lungs. It can be benign or malignant.

Earlier, Khan’s cryptic tweet on his health had sparked off several speculations. Many publications wrongly speculated that he was diagnosed with brain cancer.  Following these reports, Khan’s wife Sutapa Sikdar had issued a clarification saying:

Irrfan Khan will be seen next in Abhinay Deo’s comic caper, Blackmail, which is scheduled for release on April 6. The movie also stars Kriti Kulhari, Arunoday Singh and Divya Dutta.

Irrfan was shooting with Vishal Bharadwaj for his next film with Deepika Padukone, when his health worsened, after which Bharadwaj postponed the shooting. On March 5, the actor took to Twitter to declare that he was suffering from a ‘rare disease’ and will disclose the details in about 10 days after doctors do a thorough investigation.

We wish him speedy recovery.