Swara Bhaskar has a penchant for strong female characters. After Nil Battey Sanatta, where she played a housemaid trying to give her daughter the best of education, the actress has now brought Anaarkali of Aarah on screen. Playing the titular character in this Avinash Das directorial, Swara says she’s glad that she has got a role which is a story in itself.

For Swara, Anaarkali of Aarah is the story of struggle that the Chikni Chamelis and Munni Badnaams of Bollywood go through every day. The actress, who has always been vocal about women rights and how one just should never take s**t, is also somebody who gives her criticisers back on social media. Here, in an interview with InUth, Swara Bhaskar talks about all of that and more. Excerpts:

Why is it Anaarkali of Aarah and not Anaarkali Aarah Wali?
I think that is something you should ask our marketing team and our producers. That was actually the original title of the film and I personally that is the better title. It seems that our producers found that a lot of people didn’t know where Arrah was. And they were pronouncing it as ‘Anarkali Aravali’ And I was like ‘no, this is a mountain range guys… geography.’ But the marketing research found that it should be clear. So, it’s been called Anarkali of Arrah. I always say Anarkali Arrah Wali.

What are the qualities of Anarkali of Arrah that Swara Bhaskar doesn’t have?

I think the voice and the singing prowess.

If I tell you that Swara Bhaskar is a woman of substance, why would you agree?
I think because I don’t limit myself or other women to how we look and to whether or not we are beautiful and to our outer appearance. I see women just like men. First as human beings, who have ambitions, desires and who should have the right to fulfill it in as equal a way as men.

How are your parents actually reacting to this character that you have played?

My parents have actually seen the film and they have really liked it. And they think that this is one of my best performances.

Do your parents consider you as a successful actress and a woman?

I feel happy. I don’t know what success is supposed to be. Maybe I am successful for some girl who’s struggling for last 8-10 years in Bollywood but I suppose if Deepika Padukone looks at me, she’ll be like ‘oh, no she’s not as successful as me.’ I think success is no one definition. It’s all contextual. What is important is to be happy and I feel happy. I feel very happy right now after Nil Battey Sanatta and Anarkali Of Aarah.

You have this very glamorous character in this film but you’re also conveying a subtle message through this story. How did you find the balance? You have to look glamorous but at the end, you also have to and maintain that desi essence to it and be strong…

I think that balance is in the script itself because the story is about the world of, in some sense, item girls. What the chikni chamelis, the munni badnaam and the jawaan sheila you see… who are they? They are these girls? Of course, we see them in very high budget films for 3-minutes where they are very glamorous and sort of doing raunchy numbers. This is the world of these women. So, I think the story had that balance. I didn’t have to do very much. I think that’s why this film is very special. It doesn’t just limit these women to glamour. It gives them a voice, a story, a world. It gives them a fight. This film has given item girls that respect and identity. 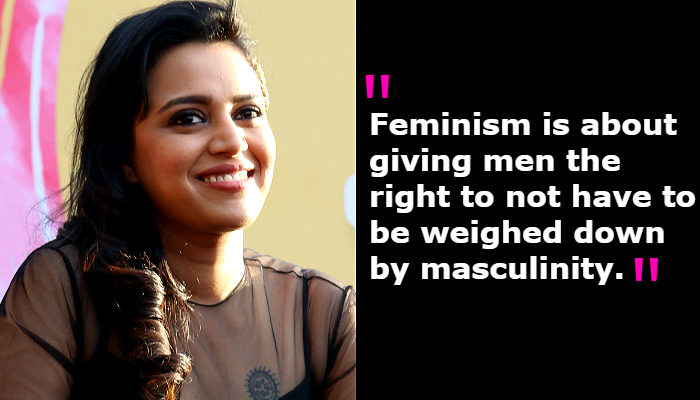 Also read:  “I’m an unapologetic feminist” – Swara Bhaskar on why she chose to play Anarkali of Aarah

How do you actually deal with criticism on social media?

There’s this amazing thing called quote and retweet or share, which kind of shows what the original tweet was. So, people who abuse me, I use quote-retweet to troll shame them.

Yeah. I do that all the time. There’s always some political nonsense happening and I want to tweet about it and I always have some film releasing. So, I am like ‘No, I can’t.’ This is like my daily struggle.