Saif Ali Khan’s daughter, Sara Ali Khan’s Bollywood debut has been the talk of the town ever since the news broke. She is all set to make her debut with Kedarnath opposite Sushant Singh Rajput. A lot has already been said and talked about since this Abhishek Kapoor directorial went on floors. People always wanted to get a glimpse of Sara’s look and character in the film and they haven’t been disappointed. The first look of the debutant actress is out and she looks beautiful and sun-kissed in the picture.

In the picture, Sara looks flawless holding an umbrella. However, the picture doesn’t describe her character in the film. 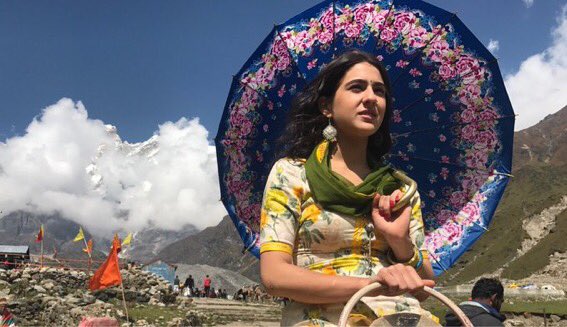 Abhishek, the director of the film, has completed the first schedule of Kedarnath and is back in Mumbai to shoot the rest of the movie. Talking about the experience shooting in the mountains, he said:

“Its been an incredible schedule.. exhausting and exhilarating.. shooting in the mountains is never easy especially when its on a yatra and the weather changes constantly but thankfully the mountain god has blessed our shoot and its wrapped as per schedule.” (sic)

Also read: After several years, THIS reason has brought Saif Ali Khan and Amrita Singh on the same page

Kedarnath is a love story set against the holy temple town of Kedarnath. The film is produced by T-Series, KriArj Entertainment, in association with Balaji Motion Pictures. Its a Guy In The Sky Pictures Production. Arjun N Kapoor of KriArj Entertainment told,

“We always knew that the film will be one special experience, but I think with Kedarnath, the experience is bordering divine, especially because ours is a love story and we have managed to shoot a part of it in the temple where they say Lord Shiva married Parvati – the Triyuginarayan Temple or the Akhand Dhuni Temple, if you may. Talk of Divine intervention, and it doesn’t get better than that!”

“We know ours is a blessed film and working with Gattu & Pragya (GITS Pictures) was not only a wholesome experience but also they are thorough professionals and together they form a very commendable team. With this being Sara’s launch pad as well, together with GITS Picture’s team, we take pride in mentoring her for her journey into Bollywood,” Arjun further added.

The makers are hoping to release Kedarnath in the summer of 2018.