He is often regarded as that cool chap who gives a damn to the world and does what he feels for. He is the Bajirao of Bollywood and the one whose personality carries that Befikre attitude. Ranveer Singh is also one of the hot favourite faces when it comes to endorse various brands. He is, in fact, the first leading actor to have endorsed condom at such a grand level. Ranveer then became the Ching master and also the face of brands like The Roadster, Rupa Frontline, Quikr, Vivo and Make My Trip. All the brands that he had been associated with in the past used his quality of being fearless, quirky, positive and superbly energetic in their ads. However, his latest ad for an apparel brand has a different story to tell.

The Ram Leela actor is the face of Jack & Jones office wear line and his OOH (Out of Home) ads had been surfacing the billboards across the country (before the company took it down). The ad had him dressed up in formal office wear and carrying a female colleague on his shoulders as the peon of the office winks and smirks in the background. The particular ad from the brand is being taken down by many on social media for being sexist. It is all the more problematic because it features one of the leading actors in Bollywood — a man who has always stood up for gender equality. The tagline of the ad says:

The ‘work’ here is the woman and the term ‘holding back’ is the desire to hold back emotions to have sex with her. So the ad suggests that once you wear a piece from the clothing line, it will build up that confidence in you to take your female colleague at home. And if we go by the happy expressions on the woman’s face, she’s quite fine with her colleague taking her home. First cements, then perfumes, deos, men’s underwear, vest and now the office wears, just how long will the  team of such brands keep using women to sell their products? This ad is just another serious example of mindless sexist campaign of products. Let’s discuss what is sexism and what is our problem with this ad.

Sexism is building strict stereotype against women on the basis of sex. Women all the over the world have been fighting to get equal workplace rights and raising their voices against harassment. Working in late night shifts, leaving away from family for work and quitting their jobs after marriage are still huge concerns for women in India. The battle is long and even a lot of men are trying hard to emanate the word of ‘stop discrimination against women’. It is a sensitive issue and India, specially, needs to have more awareness campaigns around it. Sexism is so much imbibed in our culture that people are not even aware that it’s just not the right thing to discriminate women on the basis of sex.

It’s profound if a popular brand tries to get away with an ad which, deliberately or undeliberately, hints at the fact that it’s easy to woo a girl at your office if you wear a shirt from their latest clothing line. For sure, there could’ve been better ways to pull out an interesting ad and using a chirpy face like Ranveer Singh for a brand. Also, if it is a clothing line for men, why are women even need to be a part of it? Like men only wear office shirts when they want to take their female colleagues to their place? And being able to woo his female colleague is the only achievement a man can have after wearing a crisp shirt from this clothing line. Sorry to those ambitious men who are working hard to get promotions and shape good career in offices. Because all these ‘creative’ guys can only see the fact that you are always thinking about getting along with your female colleagues at your office.

When Ranveer decided to endorse condom, he said his decision is solely based on the fact that people in India need to be educated about safe sex. He said that he has a responsibility to contribute to the society as he is one of the faces to which young Indians look upto. He was also a part of #VogueEmpower campaign where he could be seen voicing his opinions on women empowerment. Just earlier this year, he accepted the ‘Woman of the Year’ award on the behalf of his close friend, Deepika Padukone. Not just this, he considers women as the ‘fairer sex’ and says that he believes in the idea of love due to the wonderful women he has had in his life so far.

Ranveer is loved by women. He enjoys a tremendous female fan following. Women probably love him because they can see him carrying no inhibitions or dual face when he is out interacting with them. Just why didn’t he find anything offensive in that ad? Does he wear what he wears while shooting for a film because he wants to impress his female co-actor to take her home? Doesn’t being a face of a brand come with a lot of responsibilities? Or does he not have enough grey matter to understand what stereotyping a woman means? Or is his face being used by the brand without his approval for this particular ad? 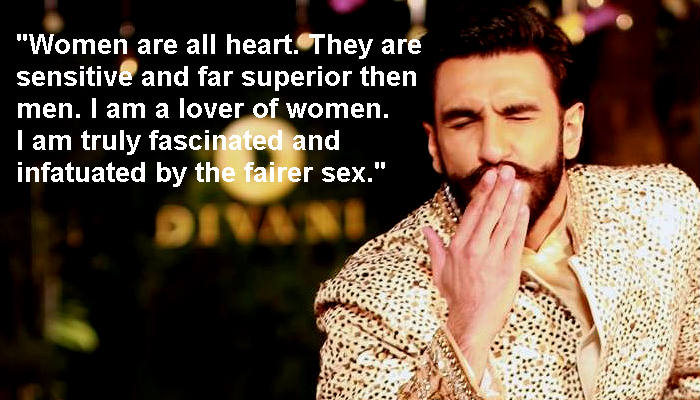 One of Ranveer Singh’s statements for women (Photo courtesy: IANS)

Here’s an appeal for Ranveer

We pull people like you and Salman Khan down when you commit such mistakes (we are naive enough to see it as mistakes). Not because like most people think, we always want to target celebs for they are vulnerable, but we do that because stars are the most easy faces to influence people. And when the star power that you have influences a common man in a way that it should not, it’s an issue. Do not just associate yourself with sensitive issues like sexism for when you can’t comply to what you say you stand for. Stop using women empowerment as a tool to promote yourself. This ad clearly indicates that you don’t even know the ‘W’ of that phrase. And it’s sad. It’s like the most studious child in the classroom caught cheating in exams.