Filmmaker Gauri Shinde’s Dear Zindagi is set for release on November 23.  A simple take on life, this positive film features Shah Rukh Khan and Alia Bhatt in the lead, while Kunal Kapoor, Aditya Roy Kapur, Angad Bedi, Ali Zafar and Siddharth Shukla play other pivotal roles. Dear Zindagi is yet another film bringing a unique pair on-screen — SRK and Alia. They might or might not be sharing the screen space romantically, but the chemistry they have in the film have already been appreciated by the audiences.

The promotions of the film have kick-started and various articles on SRK, Alia, Gauri Shinde and the film’s content are rolling up in the media. One of these articles that I came across in the morning today had a headline ‘Will Shah Rukh Khan give Alia Bhatt her biggest HIT with Dear Zindagi?’. I happened to take notice of the article as it was running as the top story of Google News’ Entertainment section. Of course, one has to keep a track of the stories flying on Google if you’re a multimedia journo. 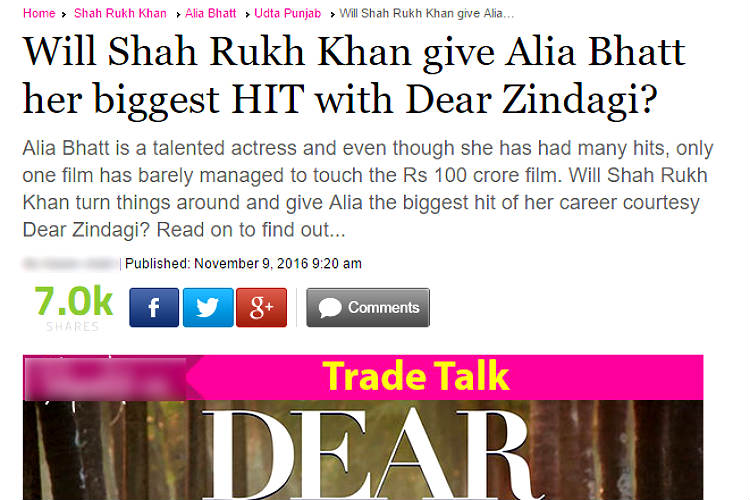 A screen shot of the article on Dear Zindagi

With all due respect to this one of the leading entertainment portal, I would like to make a point here. So, Alia Bhatt doesn’t need Shah Rukh Khan or any other actor to give her a hit of her career. Will Dear Zindagi be a hit or not, that’s for future to decide. And there’s no problem in discussing why or why not it deserves to be a hit film. But there’s a problem in deciding ‘which’ actor will make it a hit.

Shah Rukh Khan is ‘the Shah Rukh Khan’. There’re no second thoughts to it. The association of his name with a film adds to its popularity. He drives audiences to theatres. But if Dear Zindagi happens to be entering to the coveted Rs 100 crore club, it will not be only because of Shah Rukh Khan. Before jumping to the conclusions, one has to understand how a film actually does this well at the Box Office, because star presence is not the only criteria. Had this been the sole fact behind a film’s success, SRK’s Fan, Salman Khan’s Jai Ho and Hrithik Roshan’s Mohenjo Daro would not have fared at the Box Office the way they did, unfortunately. It is film’s music, and the trailer that generates content expectations. It’s pre-release buzz, and the word-of-mouth are a few other concrete things that lead a film to set the cash registered ringing at the ticket windows. 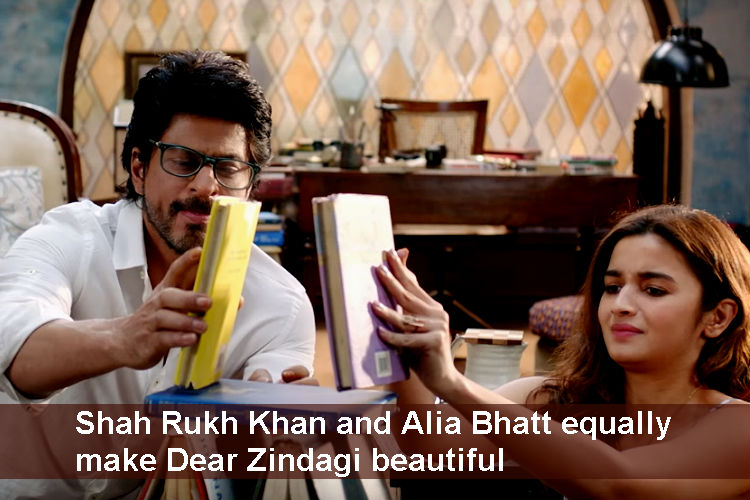 Coming to Alia, she may be a 23-year-old young female actor in Bollywood with a lot lesser experience in the industry than Shah Rukh Khan. But one just can’t deny the powerhouse of talent she is. After her first film — Student Of The Year, Alia could have easily done super glamorous roles in films and found her easy way to super stardom in the industry. However, she decided to polish the actor in herself and took up films like — Highway, Kapoor & Sons and Udta Punjab. She also did a short film titled Going Home for a cause. In Dear Zindagi too, she can be seen breaking shells with her character. She is playing the role of DOP (Director of photography) in the film, which is a rare job profile for any woman to be in the industry. So, taking away the credit of a successful film from her will not be just a right thing to do.

If Dear Zindagi enters Rs 100 crore club, it will be because of its content and the connection its characters are able to make with the audiences. Not because it features one of the most influential Khans of Bollywood.

Even Shah Rukh would agree to the same!