Poorna, a biographical drama based on the life of world’s youngest Everest climber, Poorna Malavath, who finished the summit at a record age of 13, released last week along with Nama Shabana. The film, directed and produced by Rahul Bose has a run-time of just 50 minutes and it beautifully transports the viewers to the panoramic Himalayan crest through varied emotions.

Apart from showing the courageous story of a little girl, what it also highlights is the importance of education, gender stereotyping and lack of social awareness among poor people. But, more than anything else, it inspires, which is something that most biopics released in recent times failed to do.

When a biopic is made, it’s made with the intention of telling a story that inspires, a story which triggers the audience to do better in their lives and think ‘agar vo aisa kar sakta hai toh main kyu nahi….‘ Poorna does this and more with such effortlessness. It doesn’t have a star appeal and no heavy budget. In fact, that it’s been built on a low budget is visible with its production quality on screen. But it excels where it really should. It offers a great content. It serves a great story.

Poorna is also, sadly, one of those films which hasn’t been effectively publicised. May be because, again, the budget was low and the PR agency too did its work as per the money it was paid. However, as the history has it, a good film always speaks for itself. Poorna too, rides solely on its good content. 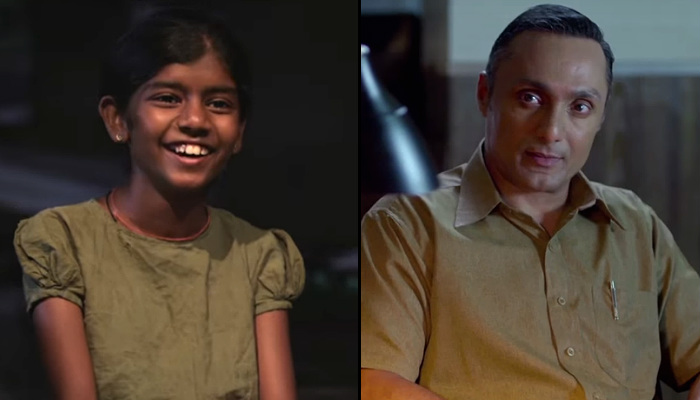 Rahul Bose and Aditi Inamdar in a still from Poorna

Right from how she craves for education at a very young age to her struggle in fighting the sick gender biasness in the society, Poorna shows a strong girl. It shows what matters more than any number of age, family background, financial prowess is a person’s will. Actually, it’s like a cinematic version of the justification of popular idiom — where there is a will, there is a way. But what it also does is that it stands tall against all the big biopics that Hindi cinema keeps on producing time and again.

Poorna, quite impactfully, lynches the sad layer of ‘forced extravaganza and loud motivation’ that most biopics are sealed with. Take for instance, MS Dhoni: The Untold Story. The film told the story of a hero in a rather heroic way. It showed grandeur and, was in all ways an expensive film. But, it lacked where it had to showcase the simplicity and innocence. Yes, it showed a people’s hero in-making but it failed to tell a story in an unglamorous way, without the extra mirch-masala, which is eventually not the purpose of biopics. A good biopic will always look real and not fantasy. It will always make its audience feel related to the character than intimidated.

On the other hand, Azhar, a film made on Indian cricketer Mohammed Azharduddin, focused more on removing the stains that Azhar had on his career. The film was more inclined towards establishing his subject as a guilt-free man than showing how actually committing mistakes in life and accepting them make us more human.

Poorna doesn’t have any such agenda at hand. It tells a simple story. It shows the highs and lows of a 13-year-old and doesn’t try to make her a hero or, for that matter, a heroine. But, it maintains till the end that she is just a normal girl. Somebody who wants to be educated and live up to the dreams of her loved ones. She doesn’t become a god or a goddess but remains a human being, the one like you and me. The film tries to put Poorna at par and not at some higher pedestal than other kids of her age, and that’s where this Rahul Bose film comes ahead of most films that claim to be ‘inspiring biopics’.