In between a group interview, he suddenly silences all and says “Main deshdrohi nahi hun” (I am not a traitor). While answering a question on how life has changed after the jail term, actor Sanjay Dutt says every moment has been a lesson for him. He reveals that all his life, his parents taught him to be a good human being and he understood what that meant when he was serving his jail term. This Sanjay Dutt is different from the Sanjay Dutt we all knew so far.

The Baba of Bollywood is content, at peace with life today. His stance on issues has changed. He doesn’t react. The man, who was famous for being short-tempered and arrogant, is no more the same now.

Currently busy shooting for his come-back film, Bhoomi, in Agra (Uttar Pradesh), Sanjay Dutt looks like a ‘free’ man in its true sense. He had organised a press conference in Agra for the film where he invited the media from Delhi and around. It was a normal press conference for all until I noticed a peculiar change in Dutt’s behaviour. A man whose body language at such film events used to convey that he was there to do a favour to the media, was comfortable and happy talking to the same people. He was smiling, trying to make the whole conversation entertaining. He was answering all the questions with full interest, including the silliest and the weirdest ones like, ‘How is your experience of staying in Marriot, Agra?’

Sanjay Dutt, an actor who was more popular for his involvement in bitter arguments and silly fights with media, didn’t shy away from folding his hands and apologising for the violence his bodyguards created during the shoot. He said:

I was not there. I didn’t know something like that was happening outside. I assure you that if I was there, whatever happened would have never happened.

He handled even the most disappointing incident which happened after the conference quite gracefully. He obliged all for the pictures, presented a calm self when loads of people ran to him to get a selfie clicked. I saw that 57-year-old man coughing, he was feeling uneasy because a few of them had blocked his face completely to get a picture. He got himself clicked, stood up and left the place. For those who have been following him since long, it’s difficult to visualise Sanjay Dutt like this — so unperturbed by what’s happening around him.

What is also visible in him is the realisation of a sense of loss. Maybe because after living an alienated life in jail, away from the family, Sanjay now wants to collect the lost moment of togetherness with the family and friends. There’s a lot of warmth with which he answers the questions about his relationship with family members and friends. Sample these:

Journo: Would you like to clear the rumours about calling your friend, Salman Khan an ‘arrogant’ man?
Sanjay Dutt: We are good friends. There is no problem between me and Salman. Arrogant is not a bad word. It’s an expression. I can be arrogant but I can be humble at the same time. 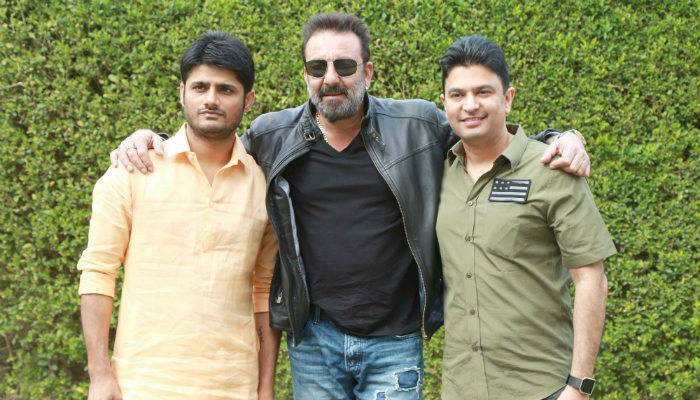 Dutt also looks like a man who has now seen everything in life. He says all he now wants to do is some good work and spend time with family. But, he is also making sure to keep his love for things alive, and also being vocal about it. A leather jacket, crisp tee, ripped jeans and fierce cowboy boots — Sanjay Dutt was all in his super stylish glory at the event. When I shifted his focus from the serious questions about Bhoomi to this fun observation, he laughed and said, “I always had this fascination towards cowboy boots. And these, with the picture of a skeleton on the top, appeared especially very interesting to me. Look, I am wearing ye phata hua jeans though.”

This Sanjay Dutt is a new man. A man who has nothing to achieve, just a life left to live.