Manikarnika actor, Kangana Ranaut, has spoken up about the controversy surrounding the biopic on the legendary freedom fighter on Thursday. Denying that her movie portrays any objectionable content regarding Rani Laxmibai, Kangana told PTI:

“It is very lowly (neech baat) to even think like that about Rani Laxmibai. We cannot even think like that, the kind of things they are saying. What they [Sarv Brahmin Mahasabha members] are saying is actually defaming. There is nothing like that. It is idle talk and I don’t know why it is being said.”

The actress, who plays the titular role of Rani Laxmibai in the movie, said that the people who are creating problems are doing this only to get famous as there’s no love story angle in the movie. 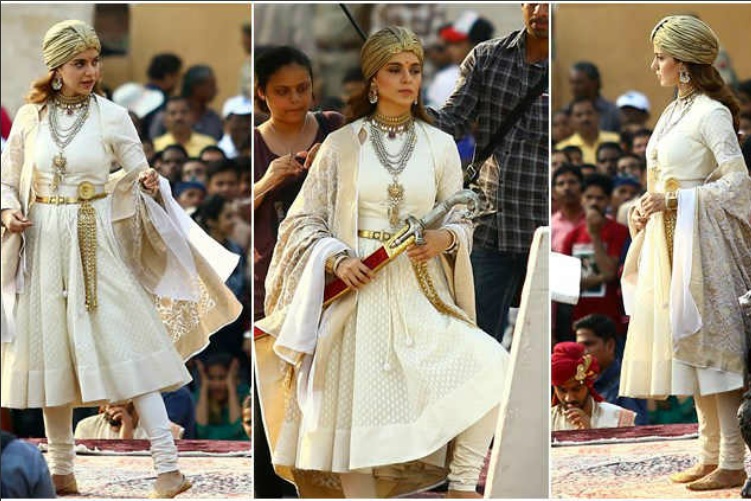 Kangana Ranaut on the sets of Manikarnika

Last week, the president of Sarv Brahman Mahasabha (Rajasthan), Suresh Mishra threatened to stall the shooting of the movie accusing the filmmakers of depicting Rani Laxmibai in an objectionable manner. Their contention: there is a love song in the movie which has Rani Laxmibai romancing a British agent. In a press meet, Mishra also threatened the state government with consequences similar to that of Padmaavat controversy. Apparently, Mishra also wrote to the producer of the movie seeking information about the scriptwriters.

In response to Mishra’s comments a few days later, Manikarnika producer, Kamal Jain clarified at a press conference that he is more than willing to share the script of the movie but only with those who are authorised. The film has been written by KV Vijayendra Prasad, who has earlier penned scripts for movies like Baahubali and Bajrangi Bhaijaan. He further said:

“As responsible filmmakers, we have taken utmost care while portraying Rani Laxmibai’s character and have consulted historians and scholars…The film showcases Rani Laxmibai in a most respectful manner and is an inspirational story which every kid and every member of a family would love to see. We as country would be proud to showcase the bravery, courage and heroism of Rani Laxmibai to the world.”

Reiterating the producer’s sentiment, Kangana also said that the story of Manikarnika will ‘surely instill a sense of pride among the people’.