In his biography, An Ordinary Life: A Memoir, Nawazuddin Siddiqui spoke about his relationship with his former co-star Niharika Singh, excerpts of which are currently going viral. In one of the chapters of the book, Nawazuddin gives a detailed account of his ‘bond’ with Niharika, who starred opposite him in the critically acclaimed film, Miss Lovely.

The book ‘revealed’ intimate details about their relationship. And by ‘revealed’ we mean it talks about their affair in way that makes it sound like a solely physical attraction. An excerpt from the book reads:

I invited her over for a home-cooked meal, a mutton dish which was my speciality. She politely agreed and came over. The dish I had made for her turned out to be absolutely terrible. But she was too well mannered to say so. Not only did she eat everything that was on her plate, but she praised it as well. Now you come to my house, Nawaz. I will cook mutton for you, she said warmly. For the very first time I went to Niharika s house. I rang the doorbell, slightly nervous. When she opened the door, revealing a glimpse of the house, I was speechless with amazement. A hundred, or so it seemed, little candles flickered beautifully. She wore soft faux fur, looking devastatingly gorgeous, her beauty illuminated even more in the candlelight. And I, being the lusty village bumpkin that I am, scooped her up in my arms and headed straight for the bedroom. We made passionate love. And just like that, out of the blue, I began a relationship with Niharika Singh, a relationship which I did not know then would last for almost one and a half years. 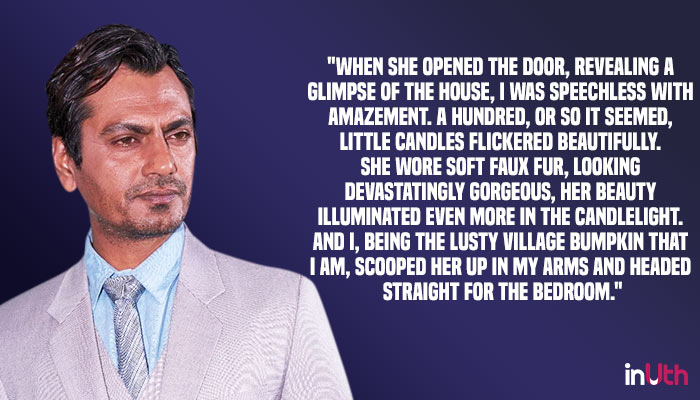 In case you’re confused, here’s the issue. The excerpt going viral begins with Nawaz talking about a foreigner he was dating, who, due to Visa issues had to go back to the US. After her return back to her home country, Nawaz noticed a ‘change’ in his co-star and tried to resolve it by inviting her to dinner. So far so good. Niharika’s counter-offer of a dinner at her place next however is narrated in a way that shifts the onus of the relationship entirely on her, and more importantly, her clothes. Candle-light and the alleged fur clothes notwithstanding, why is his relationship recounted in a way that makes it sound like salacious back-alley gossip?

But it is the next bit that truly takes the cakery:

“From that day, Niharika began to send emails to Suzanne (the foreigner he had been dating) from my email address. She would type, ‘I cannot continue with you…’ and sign off as me. Imagine the shock for Suzanne. She would send heartbreaking replies like: ‘What happened, Nawaz? Please tell me, Nawaz! … I am crying, Nawaz! Tell me, please.’ It was absolutely awful. I simply could not endure it! It was as if she was screaming, crying out aloud helplessly in unbearable pain. It was apparent that the emails had some sort of a multiple personality disorder. 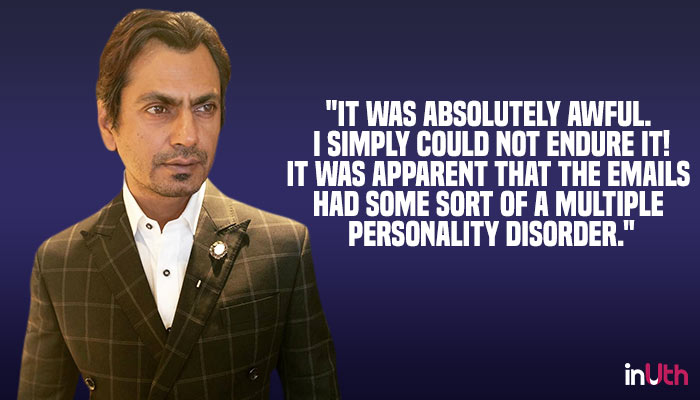 Also read: Nawazuddin Siddiqui gets candid about one-night stands and affair with co-star

What this sounds like: he could not handle a long distance relationship, so he cheated on Suzanne with Niharika, and then allegedly tried to break things off on his behalf with his ex. All this while he just.. umm.. watched on? He could not ‘endure’ Suzanne’s ‘unbearable’ pain but he could not however actually DO anything about it? How ‘absolutely awful’ it must have been for an adult man with agency and power to feel this helpless.

But here’s the cherry on top:

“It was apparent that the emails had some sort of a multiple personality disorder. ”

From looking ‘devastating gorgeous in faux fur’ to ‘multiple personality disorder’. That escalated rather quickly.

The recollection of this affair is wrapped up hurriedly. Almost in a way that makes it seem like he is eager to move on to the next woman in line.

Niharika’s reaction to the book:

When the excerpts of the book released, Niharika Singh lashed out at Nawazuddin for using cheap PR antics to promote his book. In an interview to a leading daily, the actress said:

Nawaz and I had a brief relationship in 2009 during the making of ‘Miss Lovely’ that lasted less than a few months. So today, when he paints me as a woman in fur, enticing him into her bedroom with candles, or desperately calling him and mailing other women on his behalf, I can only laugh. He obviously wants to sell his book and it would appear that he is willing to exploit and disrespect a woman just to do so. He has chosen to fabricate stories and manipulate a fleeting relationship. None of what he has written has been with my knowledge, let alone my consent. It is this very aspect of Nawaz that caused me to end my relationship with him in the first place. I have always maintained that he’s a brilliant actor. However, I had hoped these acting skills would have remained confined only to the screen. Still, I wish him well. 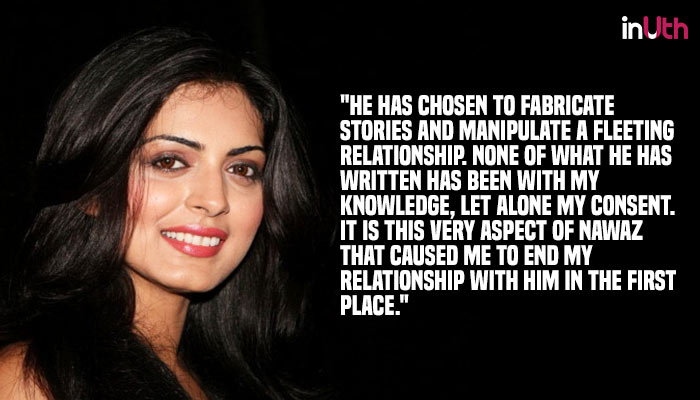 What was Nawazuddin Siddiqui thinking?

Whether or not Nawazuddin and Niharika had an affair is not up for debate here. Co-stars (or for that matter anyone else) having flings isn’t unusual. The problem is with the way Nawazuddin glorifies male gaze and predatory tendencies in these portions of the book.

I had a plain aim: go to her house, make out and leave. I could not talk lovey-dovey too much. It finally struck her that I was a rascal who cared only for himself.

Simply calling yourself a bastard or a rascal does not absolve you of the responsibility of your actions. Moreover, to reveal such intimate details without knowledge or consent of the women involved especially when her identity has not been kept a secret is appalling, to say the least. Nawazuddin is free to have as many affairs as he desires, but when his relationships turn out to be ‘locker room banter’ gift-wrapped as slut-shaming, someone needs to shut it down.  Niharika’s response to it was dignified and measured, highlighting that women must always be cautious even when they defend themselves least they come out as ‘too brash’.

Agreed the biography must have demanded that Nawazuddin get candid, but does that mean he needed to talk about his previous relationships like a B-grade film just to sell his book? There is far more to a man’s achievements than the number of women he has slept with. Are we to believe that Nawaz cannot view his own personal achievements beyond who he slept with?

Perhaps Nawazuddin Siddiqui forgot that he is revered for his talent onscreen, not his conquests off it. Let’s leave tales like that for prepubescent boys who know no better.

Perhaps being known as talent is too basic an image for a man in a society governed by sexist mores.