Nawazuddin Siddiqui, a previously unknown face, is now one of the most critically acclaimed actors in the industry. The actor was recently seen in Babumoshai Bandookbaaz which could not do well at the Box Office and was also bashed by the critics for its poor content. However, that’s not what bothers Nawaz. He says that what matters to him more than anything else is how the audience has reacted to his film.

At a recent event, Nawaz said that in case of Babumoshai Bandookbaaz, the film was liked by the audience in the small towns. It was a film made on a small budget and therefore, Nawaz said that even the limited appreciation that it received was enough. He elaborated:

“I’m not always able to select those films which follow a particular trend. All my solo films such as ‘Manjhi’ and ‘Raman Raghav 2.0’ are different. They are not typical Bollywood films, which are generally liked by the audience. The kind of films I do might be difficult to understand, but they have a lot of scope to perform, which I enjoy the most.” 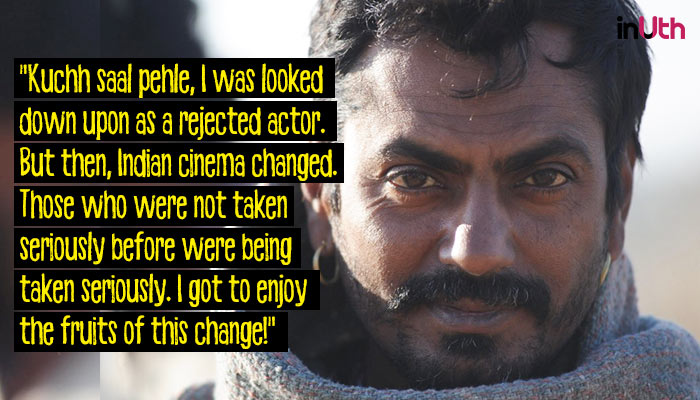 Nawazuddin Siddiqui also spoke about his struggles once

However, Nawaz knows what went wrong for the film. He added:

The film had a limited budget and the content was also adult, so we were scared whether or not people will come to theatres to watch it. We were unsure of the business because we made quite a different and ‘besharam’ (shameless) film as the characters were also unlikeable. But I’m happy that people from small towns went to see the movie and liked it.

Also read: Nawazuddin Siddiqui’s statement on being the ‘highest paid’ actor confirms that hardwork pays off one day

Nawaz also doesn’t think highly of the film critics. Talking about critics reacting to his films, he said:

Nowadays, any critic can bash a film in whichever way they want to. Everyone knows that they would only criticise. Some of them are biased. They often appreciate only certain people because of groupism. I’m not saying all critics are same, but for me, the most important thing is how the audience is reacting to my film. What would I do with four stars if no one turns up for my film? So, what the audience thinks is the most important thing.

It’s not usual to see Nawaz speak on issues that do not pertain to the film business. However, lately, he has spoken a lot about discrimination on the basis of skin colour. At the event too, when he was asked to comment on how active an actor should be in expressing his/her views, he said:

You should always express what you feel and never be afraid of putting up your opinions, no matter how difficult the situation gets. And I think I have earned this place where I can express my views if I feel something is wrong.

What holds prominence among all his statements was him talking about actors endorsing fairness brands. He said:

Promoting a fairness cream is shamelessness. Stars must stop endorsing it. I keep saying this and I’ll always say that people should be ashamed of themselves for endorsing fairness creams.

He always makes sense. Isn’t it?