The entire nation got alarmed after learning about veteran actor Dilip Kumar being hospitalized due to dehydration and kidney ailments. After a week, he was discharged from the hospital and his fans heaved a sigh of relief. In a career spanning more than five decades, Kumar has earned several accolades for playing iconic roles. He is often known as Bollywood’s real ‘Tragedy King’ while Academy Award-winning filmmaker Satyajit Ray described him as the ultimate method actor.

Dilip Sahab, as he is also revered by his admirers, went through an irreparable tragedy in his real-life too. It was regarding his relationship with yesteryear diva Madhubala. Noted author Kiran Manral in her book True Love Stories chronicles the incident when Kumar reportedly declared his love for the gorgeous actress from the witness stand during a court hearing.

It so happened that producer BR Chopra dragged Madhubala’s father Ataullah Khan to the court over his film Naya Daur. She had shot for 15 days for the film but problems arose when the next schedule demanded her to travel to Madhya Pradesh for a 40-day filming schedule. Khan outrightly told Chopra that his daughter would not go to such a faraway place for shooting. Miffed by Khan’s attitude, the filmmaker roped in Vyajanthimala for the film and asked the former to return the advance remuneration.

Also read: 9 movies that prove Dilip Kumar will remain the king of hearts for a long time to come

Manral further writes that there were three reasons that forced Ataullah Khan to take such a harsh decision. Firstly, Madhubala suffered from a serious heart condition that required emergency medical facilities at the nearest location possible. Secondly, the filming location was infested with dacoits and thirdly, Khan suspected that the schedule would facilitate the film’s male lead Dilip Kumar to get close to his daughter. 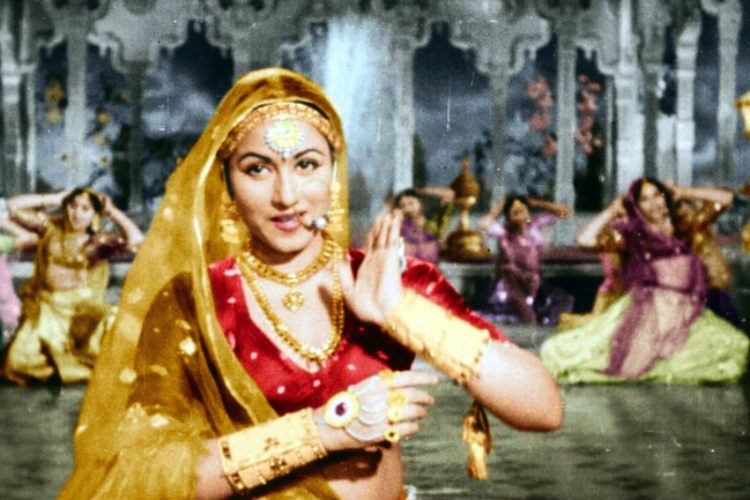 Madhubala in a still from Mughal-e-Azam. (Photo: Express Archives)

Little did the protective father know that BR Chopra was being supported by none other than Dilip Kumar. The director called the leading actor as a ‘pillar of strength’. During the hearing, an emotional Kumar reportedly testified,”I love Madhubala and continue to love her until the day she dies.”

According to the author, it was the court case that marked the point of their relationship breaking down. Years later, Madhubala’s sister told in an interview that the actress died twice, once during the case and later of the ailment. Years later, Kumar in his autobiography Dilip Kumar: The Substance And The Shadow, wrote: 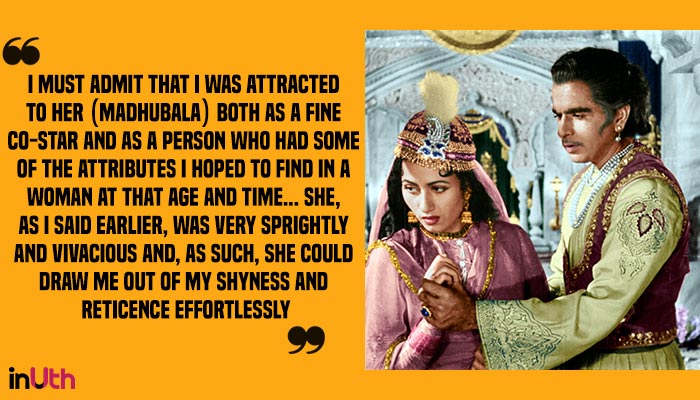 Dilip Kumar and Madhubala dated for 7 years before falling out.

Dilip Kumar, who made his debut in 1944 film Jwar Bhata, did four films with Madhubala. Their romance blossomed with Tarana, the very first film they did together.

Manral quotes an anecdote from the sets of that film wherein Madhubala reportedly sent a rose to the actor. She said that if he accepted the flower, she would know about his feelings for her. As fate would have it, Dilip Kumar was mesmerized by the gesture and what followed was a seven-year-long courtship.

The romance between the duo reached its peak during the shooting of Mughal-e-Azam and withered by the time the shooting was over after nine long years. It is said that the actors refused to speak to each other towards the end of filming schedule. The film, directed by K Asif, remained the highest grosser for 15 years before being overshadowed by Amitabh Bachchan and Dharmendra-starrer Sholay.

An interesting anecdote pertains to the filming of Mughal-e-Azam when the two actors had fallen out with each other. There was a scene in which Salim was supposed to slap Anarkali. Kumar slapped Madhubala so hard that latter had tears in her eyes. Nevertheless, the duo remained professional and completed the film.

Madhubala married actor-singer Kishore Kumar but it was rumored to be an unhappy one. She was suffering from Ventricular Septal Defect, commonly known as a hole in the heart. Her condition deteriorated with each passing year and Madhubala remained bedridden in her last days. But Dilip Kumar did not visit her during lifetime. On February 23, 1969, she passed away at the young age of 36. By the time he came to Mumbai from Chennai, her last rites had been performed.

It is said that relationship between the two actors had ended during the Naya Daur court case. Kumar, later on, married Saira Banu, who happens to be 22 years younger to him.