SS Rajamouli’s Baahubali: The Conclusion has created new records at the Box Office since its release on April 28. The Prabhas-starrer has also been a surprise hit in Pakistan, raking in more than Rs 6 crore at its Box Office. The fictional epic’s success is surprising given the fact that it is the first dubbed regional film to be released in Pakistan after a long time. It was released in 100 theatres across the country and is running to packed theatres despite having a mythological undertone.

Baahubali 2 is not the only Bollywood film that has set the Box Office on fire across the border. It is another fact that the Pakistan government recently banned films like Naam Shabana, Raees, Baby and others. Meanwhile, we take a look at 10 highest grossing Indian films that have done exceedingly well in Pakistan. These figures have been compiled from entertainment website BoxOffice Detail and have been converted to the Indian currency. 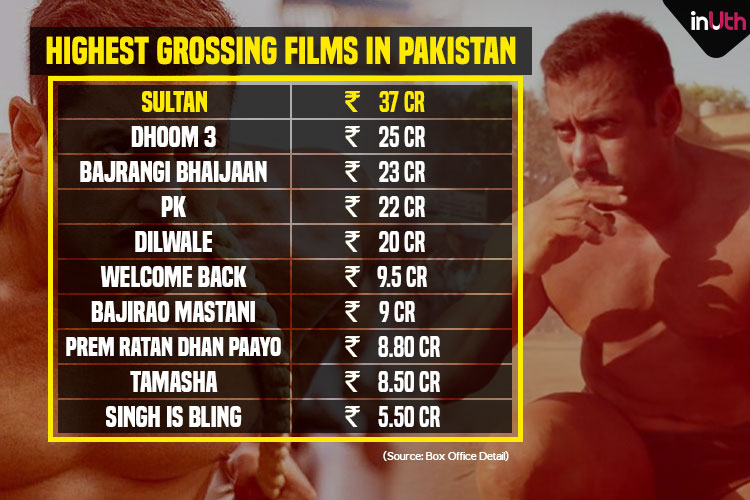 Sultan is the highest grossing Bollywood film in Pakistan

As per the figures, the dominance of Khan triumvirate continues in Pakistan as well. Among the trio, Salman Khan and Aamir Khan are the most popular stars with the former’s wrestling drama Sultan topping the charts with a collection to the tune of Rs 37 crore. Aamir Khan’s PK follows the suit with Rs 25 crore earnings while Bajrangi Bhaijaan occupies the third spot.

Now, here are two things that you need to know. Shah Rukh Khan has only one film making it to the Top 5 list. His 2015 release Dilwale garnered Rs 20 crore at Pakistan Box Office while Salman has Prem Ratan Dhan Paayo taking the eighth spot. Surprisingly, Ranveer Singh’s Bajirao Mastani made it to the list despite the protagonist chanting Har Har Mahadev and calling for the establishment of a Hindu kingdom in India.

The censor board in Sindh cleared the film after ordering the deletion of 10-15 seconds of the opening sequence. While the Punjab board gave a green signal but the Central Board in Islamabad banned the film. Released on December 18, 2015, Bajirao Mastani clashed with Dilwale. Later the film was apparently given a go-ahead by Islamabad and earned a little over Rs 9 crore.

Meanwhile, Aamir Khan-starrer wrestling biopic Dangal is the highest grossing Indian film abroad. It has taken the Chinese Box Office by storm and raked in more Rs 500 crore there. But, the film could not make it to the theatres in Pakistan as Aamir refused to cede to the censor’s demands of deleting references to India and the national anthem. Had it been released, the flick would have created more records there.