Aamir Khan-starrer Dangal has shattered several records at the box office, not just in India but beyond the borders. Released in 7,000 screens in China, the wrestling biopic has earned more than Rs 400 crore in the neighbouring country. According to Internet Movie Database, the film is top Indian grosser overseas with an astounding figure of $ 89 million (Rs 577 crore approximately).

Directed by Nitesh Tiwari, Dangal is a biopic of Mahavir Singh Phogat, who defied odds to train his daughters Geeta and Babita Phogat. Aamir Khan won the Filmfare Best Actor award whereas Tiwari bagged the coveted trophy in Best Director category. The 51-year-old actor has all the reasons to be happy as his 2014 release PK is the second in the list of highest grossing Indian films in the overseas market. 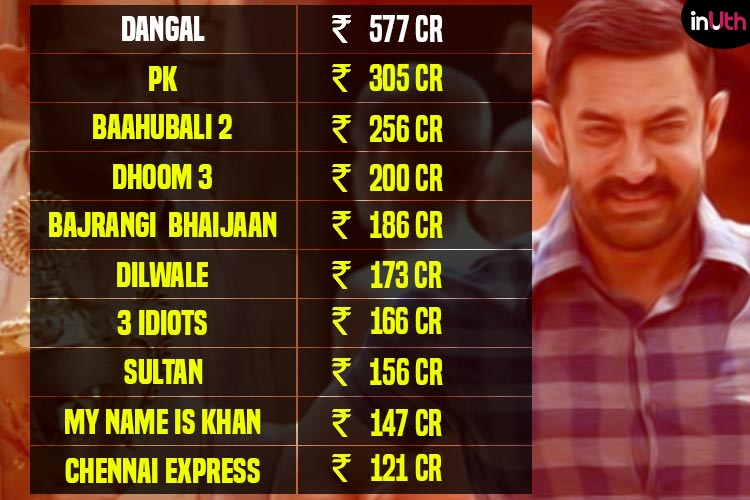 On the other hand, SS Rajamouli’s fantasy epic Baahubali: The Conclusion is third on the list with having accumulated Rs 256 crore overseas in the past 17 days. The Prabhas and Anushka Shetty starrer has grossed more than Rs 1300 crore worldwide and is poised to shatter more records in days to follow.

An interesting thing to note is that nine out of 10 slots have been occupied by either of three Khans. Out of the trio, Aamir Khan boasts of four films performing extremely well beyond the Indian shores. He is followed by Shah Rukh Khan who has Dilwale (Rs 173 crore), My Name Is Khan (Rs 147 crore) and Chennai Express (Rs 121 crore).

Salman Khan, who has been enjoying astounding success since Wanted has two films Bajrangi Bhaijaan (Rs 186 crore) and Sultan (Rs 156 crore) in his kitty. He will be next seen in Kabir Khan’s Tubelight, a 1962 Sino-India war drama that is expected to hit the theatres on June 23.

As far as Shah Rukh Khan is concerned, his films have always performed well overseas. Beginning with Aditya Chopra’s Dilwale Dulhania Le Jaayenge that acquired immense popularity among Indian diaspora, SRK has a near perfect record away from Indian shores. Even movies like Happy New Year and Dilwale that were panned at home were a hit abroad.  With both Baahubali 2 and Dangal continuing their stellar run, the Indian cinema lovers couldn’t have asked for more. Meanwhile, check out Dangal‘s trailer.