After becoming the first transgender to pass class XII exams in Tamil Nadu earlier this year, 20-year-old Tharika Banu now has the option of enrolling herself in a siddha medicine course in the state. The Madras High Court on November 27 directed the Tamil Nadu government to allot seats for persons of the third gender in Bachelor of Siddha Medicine and Surgery course. Siddha medicine is a system of traditional medicine originating from Tamil Nadu and promoted by the Ministry of Ayurveda, Yoga and Naturopathy, Unani, Siddha and Homoeopathy (AYUSH).

Justice N Kirubakaran, while rebuking the state authorities for not complying with the Supreme Court and High Court orders for providing reservation to transgenders, said,

For the first time in history, a transgender has knocked at the doors of this court seeking to consider her candidature for admission in a BSMS course. Instead of living a stigmatic and in spite of undergoing various insults and even assaults, harassments in the hands of some unruly elements, when they come forward to get education, the same has to be encouraged.

Rejecting the state government’s stance that Banu had not obtained the required 50 percent marks to secure the seat, the judge pointed out that the prospectus had no mention of the provision of seats for transgenders. He also said, 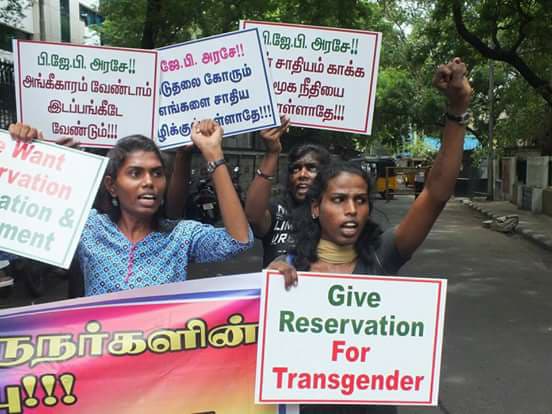 The Madras High Court had previously ordered all institutions and companies to recognise transgenders as the third gender as well as create necessary provisions on forms and applications. In the landmark 2014 NALSA judgement, the Supreme Court affirmed equal fundamental and constitutional rights for transgender people and gave them the right to self-identification of their gender as male, female or third-gender.

Born as S Patchaikili, Tharika Banu got her name changed and underwent sex reassignment surgery to lead her life as a woman. When her application for admission to Siddha Medical College was rejected on grounds of her gender, activist Grace Banu filed a case at the Madras High Court in October this year.