In an unusual move, one of world’s leading tobacco company and maker of top cigaratte brand Marlboro, Philip Morris International announced that its New Year’s resolution was to “give up cigarettes”.

Taking out full-page ads in several UK newspapers, the big tobacco giant said that it will cease to manufacture cigarettes and replace them with alternatives such as e-cigarettes.

“It won’t be easy. But we are determined to turn our vision into a reality,” the ad says. 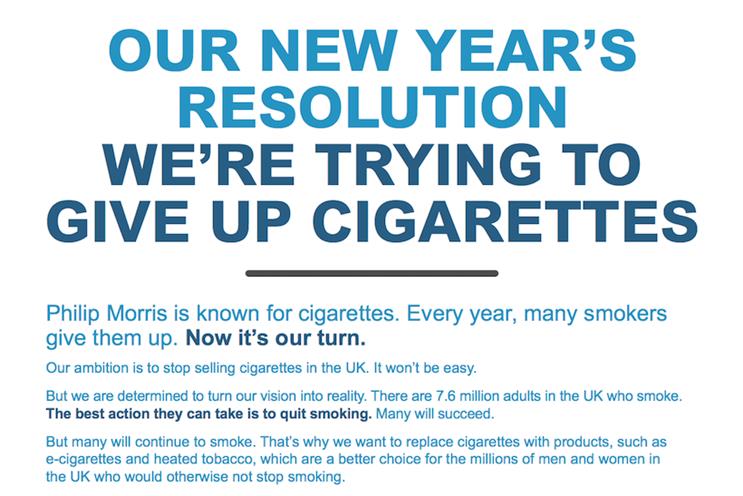 Underling the need for a ‘smoke free’ future, the cigarette maker’s ad said, “There are 7.5 million adults in the UK who smoke. The best action they can take is to quit smoking. Many will succeed. But many will continue to smoke. That’s why we want to replace cigarettes with products … which are a better choice for the millions of men and women in the UK who would otherwise not stop smoking.”

The advertisement goes on to claim, “No cigarette company has done anything like this before. You might wonder if we really mean it.”

It also added that it had spent British Pounds 2.5 billion in research and development.

The official website of Philip Morris lso charts out a roadmap on exiting the cigarette business and focusing on “less harmful, yet satisfying, alternatives to smoking”.

The website also lists their e-cigarette products and claims that more than 3.7 million smokers have switched to these products.

However vaping, as the practice of using e-cigarettes is commonly called, brings with it, its own share of concerns as various studies in the recent past have suggested that it is as harmful as smoking a cigarette

Despite the global attention, this isn’t the first time the company has voiced such ambitions. In October last year, the company committed to a “smoke free” Australia in a push to eventually stop producing cigarettes.

“I hope by 2020 we stop selling conventional cigarettes if not completely, or handing them over to someone else to worry about,” Australian Paul Riley, Philip Morris’s Japan president, told news.com.au last month.