Before the formal ceremony, Donald and Melania Trump attended a service at St. John’s Church. The current and the successor American presidents left the White House together for the US Capitol.

Stay with us for live updates of the event:

President Trump and VP Pence wave goodbye to the Obamas as they depart the US Capitol https://t.co/YpuCylp4Iz https://t.co/OF1J4N24Vb

11:05 pm: Former President Barack Obama and former First lady Michelle Obama leave the US Capitol. It is the end of an era

Pres. Obama waves goodbye as he boards Marine One for Joint Base Andrews with Michelle Obama #Inauguration2017 pic.twitter.com/WT4EEPAtMX

President Trump: "I will never, ever let you down. America will start winning again." https://t.co/RxTvfL9m8H https://t.co/eQ5ci5Bodh

10:46 pm: “You will never be ignored again,” Trump tells Amricans

President Donald Trump: "We will be protected by the great men and women of our military and law enforcement." https://t.co/l0eRxvtwm2

10:45 pm: We will unite world against “radical Islamic terrorism”: Trump

10:42 pm: We will not fail, we will prosper: Trump; names two simple rules: Buy American and hire American

10:41 pm: We will not impose our style of life on anyone but will shine. We will discover our loyalty to each other: Trump

10:38 pm: From this day forward a new vision will be followed and that will be : AMERICA FIRST, says Trump

President Trump: "January 20, 2017 will be remembered as the day the people became the rulers of this nation again" https://t.co/GscRYRgTp6

10:37 pm: The power is now being transferred from Washington DC back to the people of the Untied States…This moment is your moment. It belongs to you: Trump

10:35 pm: President Donald Trump thanks the Obamas for their help during transition of power

Trump thanks Obamas for help during transition: "They have been magnificent" https://t.co/pakz0LbFqs #Inauguration https://t.co/8W4V2DaKAs

10:28 pm: Donald Trump takes over as the 45th President of the United States of America

10:20 pm: Mike Pence takes over as the Vice President of the United States of America

BREAKING: Mike Pence takes oath of office as the vice president of the United States. pic.twitter.com/FbD2kP8ora 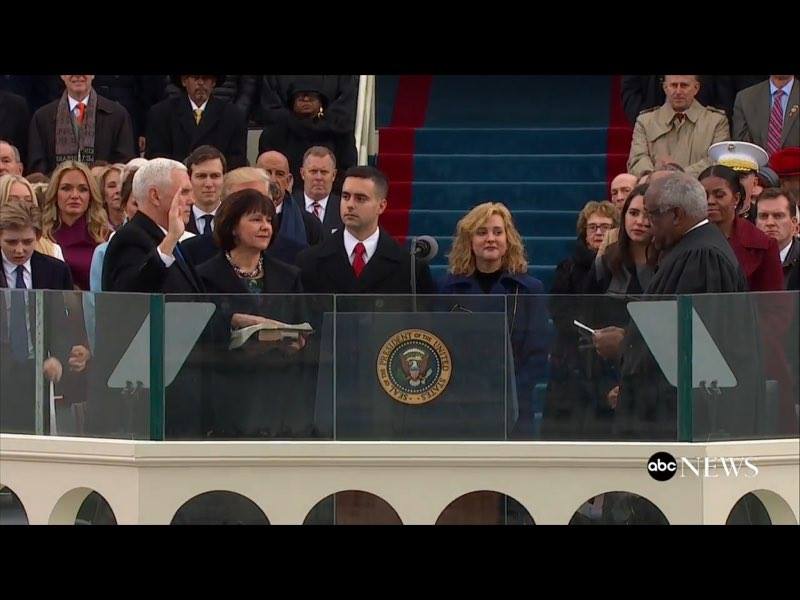 9:56 pm: US President-elect Donald Trump arrives at the Capitol Hill, swearing in ceremony to begin

Trump steps out on Capitol for his inauguration as the 45th President of the United States https://t.co/pakz0LbFqs https://t.co/FXHMi8n9Ij

Vice President-elect Mike Pence walks out at the Capitol for #Inauguration2017 https://t.co/pakz0LbFqs https://t.co/KWI9Md3nd5 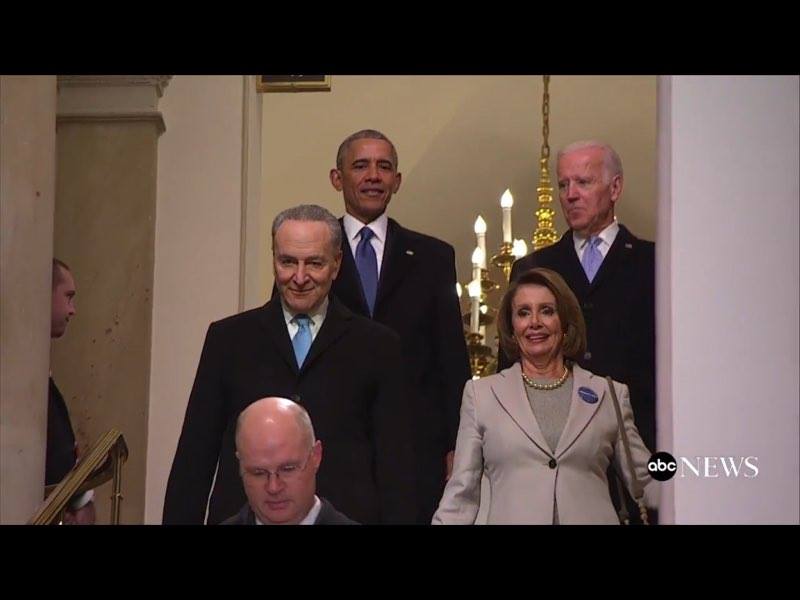 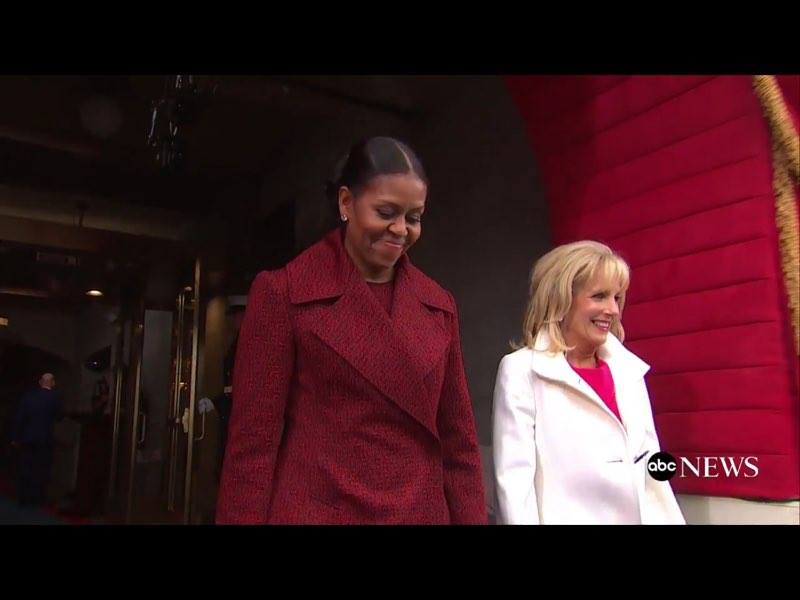 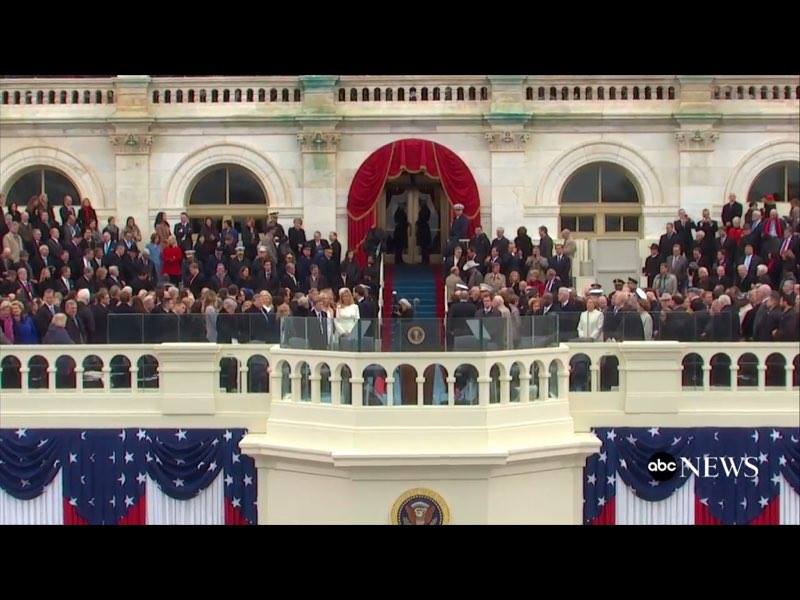 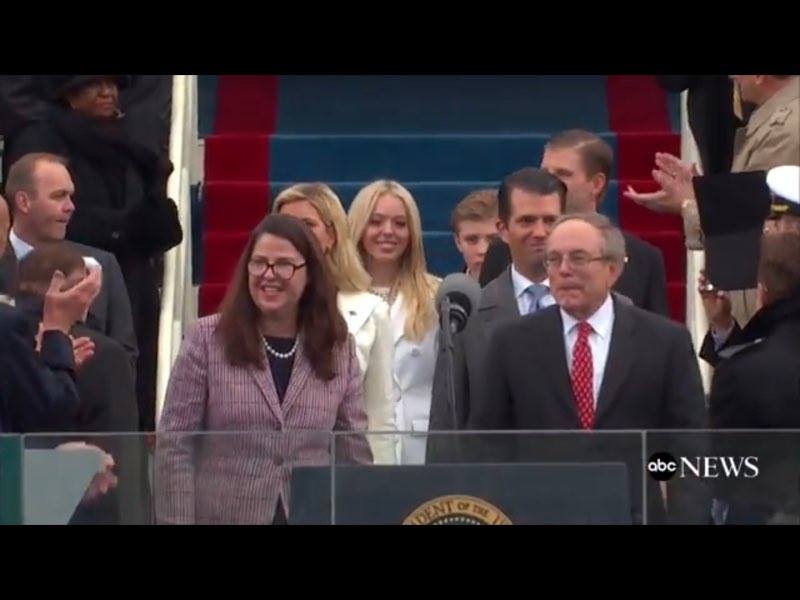 9:30 pm: Barack Obama reaches with Donald Trump at the Capitol Hill, swearing in to begin soon 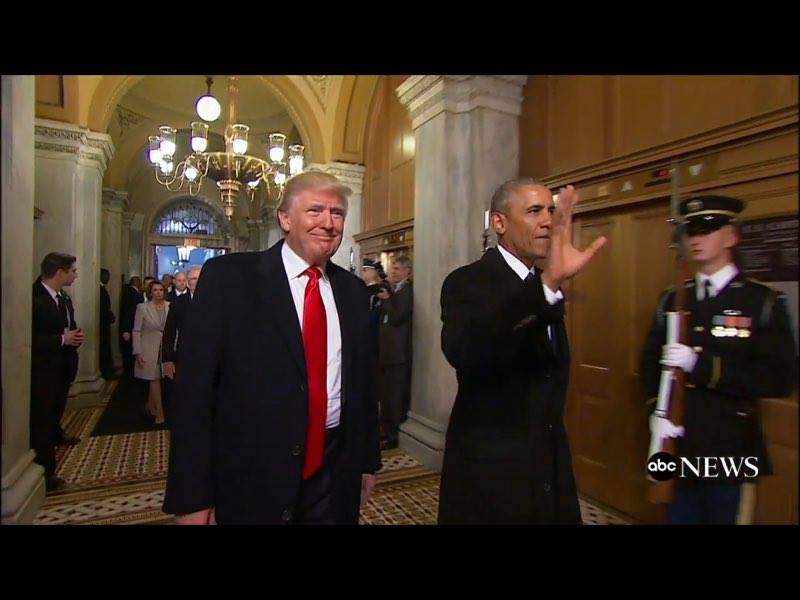 9:24 pm: The cavalcade of the 44th and the 45th President of the United States to reach for the inaugural ceremony soon 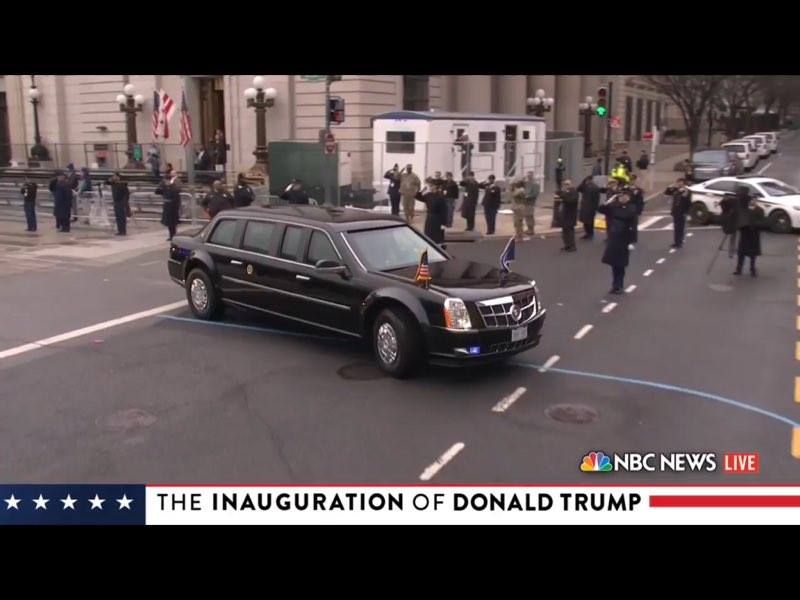 Meet the Army vet who hasn't missed a swearing-in since Nixon https://t.co/WzD9XJzsIV pic.twitter.com/SZQ87434SV

9:00 pm: Barack Obama steps out of the Oval office for the one LAST time 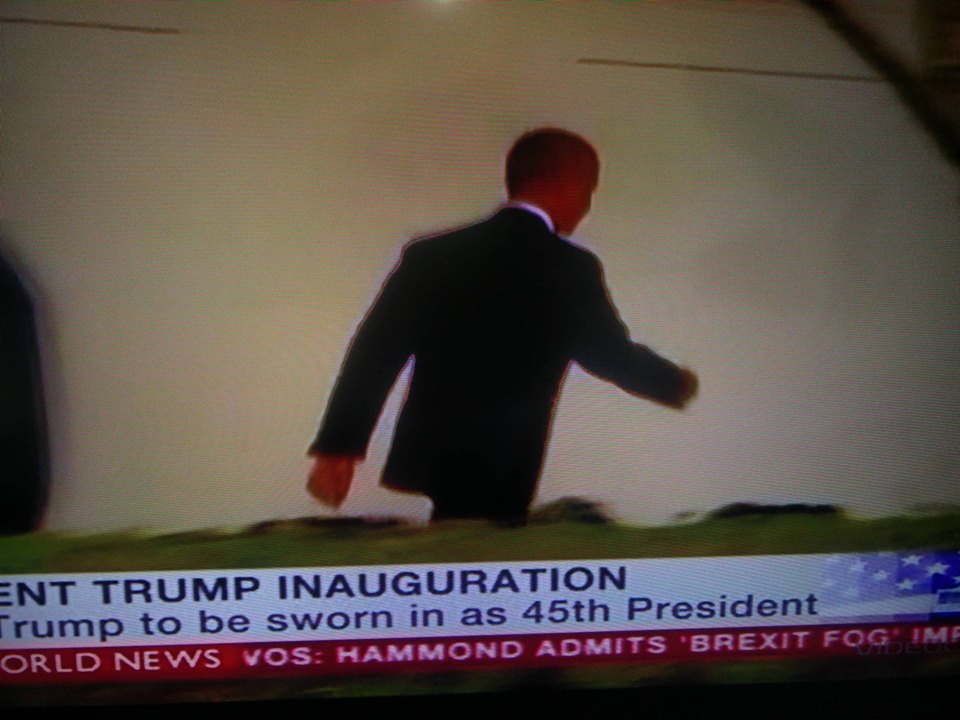 9:00 am: Bernie Sanders arrives at the inaugural ceremony <

KellyOCam: My behind the scenes view @HillaryClinton @billclinton arrive inside the Capitol. pic.twitter.com/t43h5AT4JK

8:50 pm: The Clintons arrive for the ceremony

First look at @billclinton and @HillaryClinton on #Inauguration Day. pic.twitter.com/6FbQjLQtSv

360° photo of the Capitol before the swearing-in ceremony of US President-elect Donald Trump https://t.co/Jc3711hD9H #Inauguration

8:40 pm: Donald Trump and Barack Obama at the White House 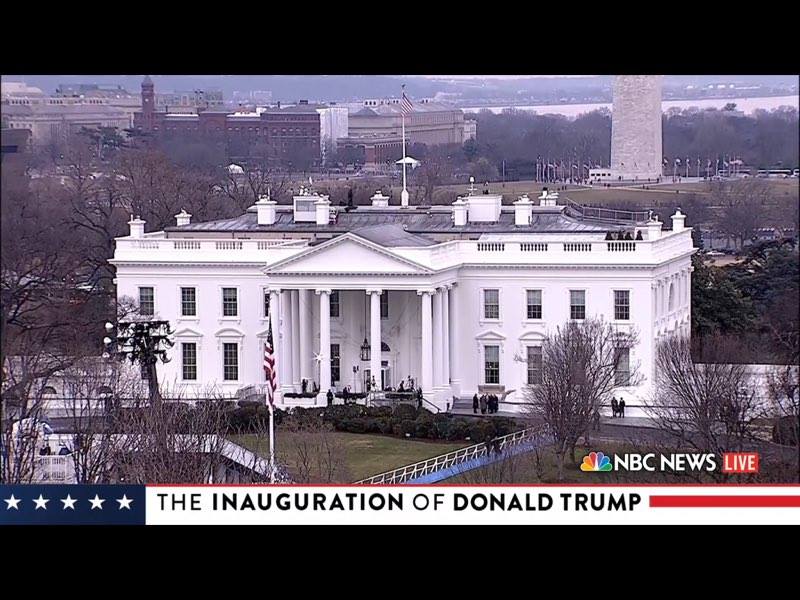 That awkward moment when you don't know what to do with your gift pic.twitter.com/D7sSJIpodQ

8:20 pm: Barack and Michelle Obama wait for the Trumps at the White House 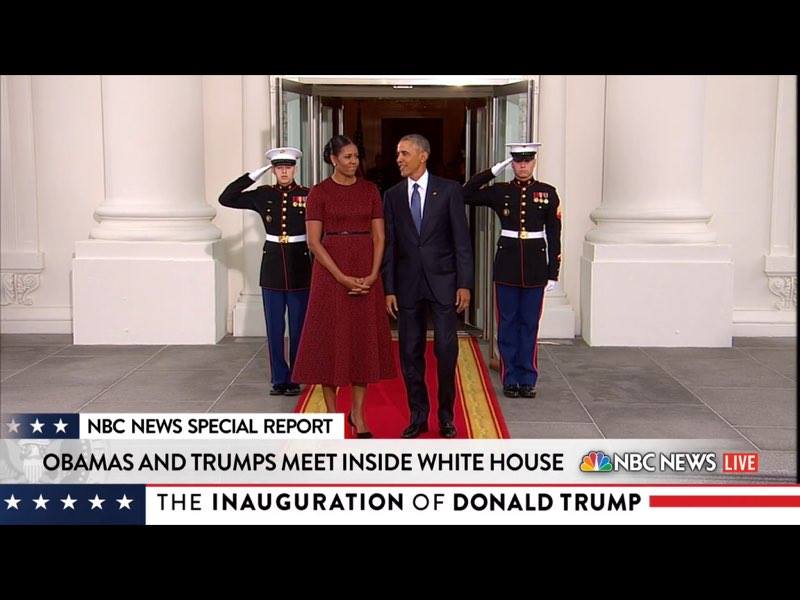 8:20 pm: Donald and Melania Trump arrive at a church service

PHOTO: Melania Trump arriving at a church service with her husband, the president-elect, on #Inauguration Day. pic.twitter.com/RLtDlMhY1c

8:13 PM IST: The Trumps and Obamas pose for pictures at the White House before walking in. It is here. The end of presidency of Barack Obama and the beginning of Donald Trump era.

8:12 PM IST: Donald Trump’s motorcade arrives at the White House. The Obamas are waiting at the entrance to receive the Trumps.

8:04 PM IST: Only two out of 15 cabinet picks of Trump have been approved by the US Senate till now. They are expected to be sworn in along with Trump and vice-president Mike Pence.

8:02 PM IST: Nearly 28,000 security personnel manning the streets around the White House as they gear up for massive anti and pro-Trump demonstrations.

7:57 PM IST: Outgoing US President Barack Obama just tweeted out a thanks to the US public, probably his last as president.

It’s been the honor of my life to serve you. You made me a better leader and a better man.

7:47 PM Indian Standard Time (EST)- Thousands of people seen gathering outside the White House in Washington DC as we near the inauguration ceremony.

Thank you for a wonderful evening in Washington, D.C. #Inauguration pic.twitter.com/a6xpFQTHj5

Thank you for joining us at the Lincoln Memorial tonight- a very special evening! Together, we are going to MAKE AMERICA GREAT AGAIN! pic.twitter.com/5d774OCx5o

## Trump will review the troops. There will be a parade from the Capitol to the White House
and in the evening there will be an inaugural ball.

You were the change. Because of you, America is better poised to lead in the 21st century than any other nation on Earth. pic.twitter.com/6yMkkZ5KzX

##Bollywood actress Manasvi Mamgai to perform at the inauguration