Nabi Hussain, a Rohingya refugee fleeing persecution from Myanmar, owes his life to a yellow plastic oil drum. The 13-year-old who couldn’t swim, and had never even seen the sea before, clung to an empty drum and struggled for nearly 2.5 miles in water, all the way to Bangladesh.

“I was so scared of dying,” Nabi told Associated Press adding that he thought it was going to be his last day.

Nabi, who grew up in the mountains of Myanmar, is the fourth of nine children of a farmer who grows paan, the betel leaf used as chewing tobacco. He never went to school.

He is new to the country and knows almost nobody in Bangladesh. His parents back in Myanmar are not aware whether he is dead or alive. The teenager does not smile and rarely makes eye contact. 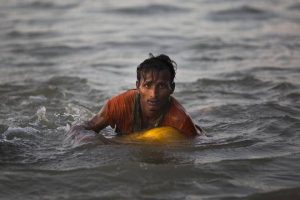 The teenager is not alone; in just a week, over three dozen boys and young men used cooking oil drums like life rafts to swim across the mouth of the Naf River and wash up ashore in Shah Porir Dwip, a fishing town and cattle trade spot.

Earlier in August, after their homes were torched by Buddhist mobs and soldiers, more than 600,000 Rohingyas have risked the trip to Bangladesh.

“We had a lot of suffering, so we thought drowning in the water was a better option,” said Kamal Hussain, 18, who also swam to Bangladesh with an oil drum.

Although Rohingya Muslims have lived in Myanmar for decades, the country’s Buddhist majority still sees them as migrants from Bangladesh. The government denies them citizenship, and the United Nations has called them the most persecuted minority in the world. 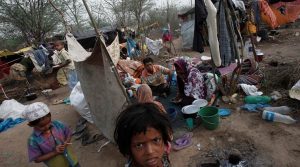 “I heard horrific stories of rape and gang-rape, with many of the women and girls who died as a result of the rape,” Pramila Patten, a special representative of the UN Secretary-General on sexual violence in conflict, told reporters in Dhaka.

“My observations point to a pattern of widespread atrocities, including sexual violence against Rohingya women and girls who have been systematically targeted on account of their ethnicity and religion.”