Pakistani cricketer-turned-politician Imran Khan was at the centre of a major goof-up after he erroneously referred to AIADMK leader VK Sasikala as former Tamil Nadu chief minister J Jayalalithaa.

Not only did he get confused about Sasikala, the former cricketer also got a lot of his facts wrong.

Khan tweeted on Tuesday , “Sasikala, a famous South Indian actress turned politician in India’s Tamil Nadu died recently and below her house were discovered gold reserves, jewels and illegal stash of money! A message to all corrupt leaders: The hoarded billions stolen from our impoverished masses will be left behind.” (sic) 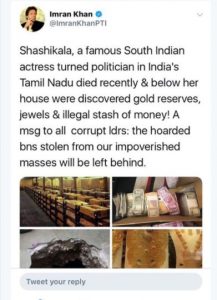 First of all, Sasikala is NOT dead, as she is serving a four-year sentence in a Bengaluru jail after she was found guilty in a disproportionate assets case, in which Jayalalithaa was also convicted, but the charges had been abated against her since she had passed away.

Also, Jayalalithaa did not die recently, her first death anniversary was observed on December 5, 2017.

About the gold reserves and jewels found under her house, the Tehreek-e-Insaaf chairman clearly shared a viral post with no verification.

The Income Tax sleuths did raid Poes Garden, Jayalalithaa’s former residence last month, but did not search the former CM’s room. The I-T officials were quoted saying that only the living quarters of Sasikala, her key aide, and secretary S Poongundran were searched.

In a series of raids, Income Tax sleuths recovered over Rs 1,430 crore through Sasikala’s properties, PTI reported. However, they never disclosed that they had found any riches like Khan had alleged.

Also, the pictures he had attached with the tweet are apparently of gold reserves maintained by the Bank of England and appear first when searched for ‘gold reserves’ on Google Images.

Twitter was quick to call out his gaffe and asked the leader to get a fact-check done before posting anything on social media.

Dear @ImranKhanPTI you got it completely wrong. Sasikala is in jail. Her friend Jayalalitha, ex-CM of Tamil Nadu, died late last year and those pictures are obviously fake. One expects better from a senior politician like you. pic.twitter.com/6arkmZBYVD

We accepted you to be national embarrassment now please avoid international scoops.

Mr Khan, we request you to either hire a social media handler or just Google, please!