President of Turkey Recep Tayyip Erdogan, who is on a two-day visit to India, is set to meet Prime Minister Narendra Modi on Monday and discuss a host of issues ranging from terrorism to business. A joint statement is also expected. However, his views on India-Pakistan relationship—particularly on Kashmir—didn’t sound very friendly and might not go down very well with India. Much against India’s stand on the Kashmir issue, Erdogan called for multilateral talks to solve the issue of Kashmir. India is of firm belief that Kashmir is the bilateral issue and India and Pakistan are the only talking heads in it. Erdogan also said that the Kashmir issue has to be solved ‘for once and all’ as allowing the conflict to go on would cause more casualties. He also said that he keeps talking at length on the issue with his ‘dear friend Nawaz Sharif’, the Prime Minister of Pakistan.

Erdogan, who is looking at improving relations with the South Asian countries, said that Turkey was looking for friends in the region and that its stability was vital for its development. He called both India and Pakistan its valued friends. Erdogan said that he is in favour of both India and Pakistan becoming part of the elite global nuclear group NSG and said that India must do away with its ‘attitude’ of not trusting its neighbour to get a seat in the club.

Kurds are the largest ethnic minority in Turkey and Kurd insurgent groups are fighting for an independent Kurdistan and seeking independence from Turkey.

Answering the question, Erdogan said that there couldn’t be any comparison between Kashmiri separatism and Kurdish separatist movement. According to him, the former is a territorial dispute while the latter promotes terrorist activities.

Here are some important quotes from his interview to WION news channel: 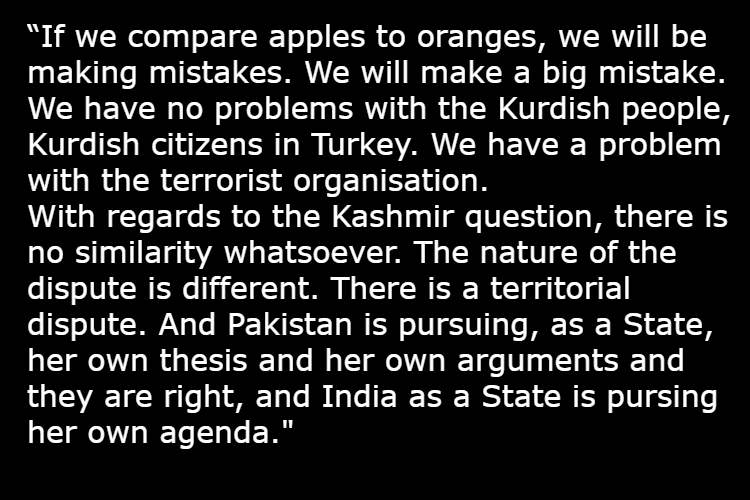 You can watch the full interview here: