After ordering all news channels to go off air, Pakistan authorities have also blocked social media sites including Facebook, Twitter and YouTube. The media blockade comes in light of ongoing crackdown by law enforcement agencies on Islamic protesters in Islamabad.

The suspension was ordered by the Pakistan Electronic Media Regulatory Authority for violating media regulations showing live coverage of a security operation, a statement from the regulator said. 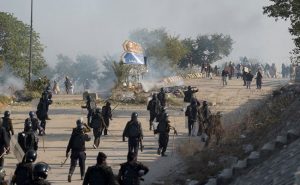 Meanwhile, state-run Pakistan Television is the only news channel which continued its broadcast, but the channel aired a talk show discussing politics.

Nearly 8500 elite police and paramilitary troops in riot gear are taking part in the clearance operation, which was launched soon after the final deadline of 7 am given to protesters expired, Pakistan’s Dawn reported. 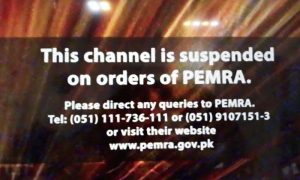 Dozens are reported to have been injured during the crackdown and are being treated in various hospitals of Rawalpindi and Islamabad.

The mass protest, plus the recent gains of two new hardline parties in Pakistan, demonstrated the religious right’s gathering strength ahead of next year’s election in Pakistan.

The protesters have paralysed daily life in the capital, and have defied court orders to disband, demanding the firing of the minister of law.

Police resort to shelling against protestors at Star Gate in #Karachi. Multiple protests have sprung up across the country after the operation against members of the #FaizabadDharna in #Islamabad began this morning | https://t.co/FEzpUGlJhu pic.twitter.com/WsZvY8jn4u

Tehreek-e-Labaik blames the minister, Zahid Hamid, for changes to an electoral oath that it says amounts to blasphemy. The government puts the issue down to a clerical error.

110 people including 30 policemen and 14 FC personnel have been injured in Islamabad operation #FaizabadDharna https://t.co/yfFwdVDWYN pic.twitter.com/a5IlzcSOkn

Also Read: Why a Pakistan-based handle was suspended after a tweet on DU student

Death to blasphemers” is a central rallying cry for Tehreek-e-Laibak, which was born out of a protest movement lionizing Mumtaz Qadri, a bodyguard of the governor of Punjab province who assassinated his boss in 2011 over his call to reform strict blasphemy laws.