Saudi Arabia has suspended all ties with Canada and has also expelled Canada’s ambassador, but one of its pro-government accounts went a step ahead by sharing an image that reminded many of the 9/11 terrorist attacks on the World Trade Center.

Shared by Twitter handle ‘@infographic_ksa’, the picture shows a plane of Air Canada heading towards the skyline of Toronto—Canada’s largest city—with a message in English saying “He who interferes with what doesn’t concern him finds what doesn’t please him”. 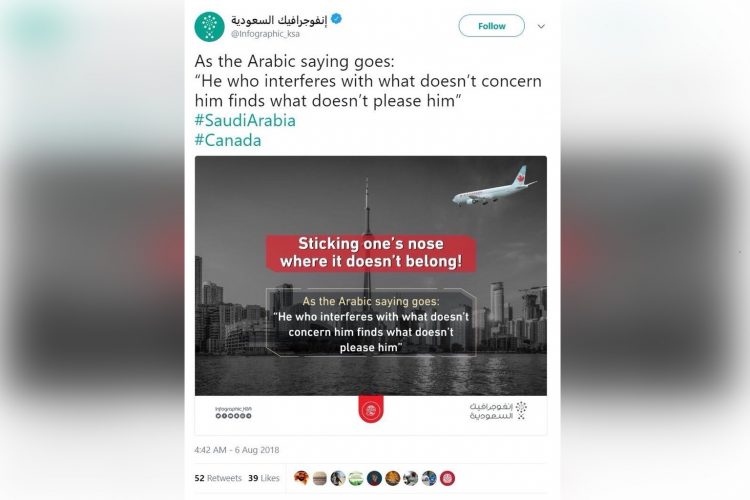 The account later deleted the post and issued an apology saying that the plane was intended to symbolize the return of the Canadian ambassador. The post was re-uploaded with the plane omitted from the picture, however, soon after issuing the apology, the account was deactivated. 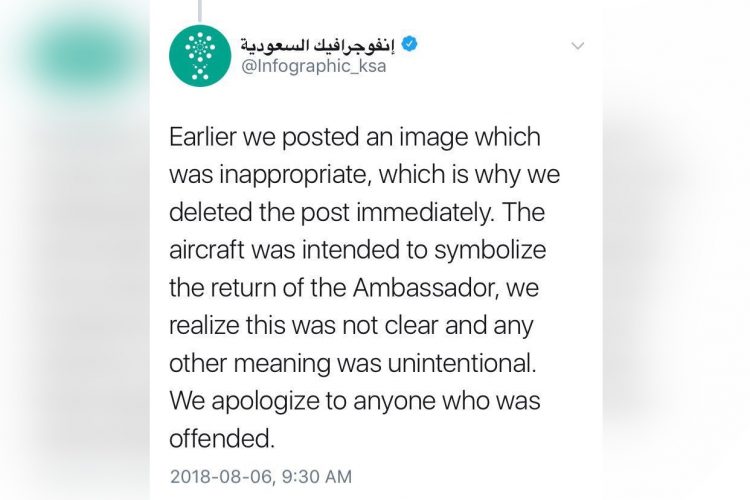 Last week, the middle-eastern country expelled Canada’s ambassador to Saudi Arabia for “interfering in the country’s internal matters” after Canada urged Saudi Arabia to release human rights activists, including Samar Badawi. Badawi is a women’s rights activist who campaigned against the country’s male guardianship system and has been repeatedly arrested under disobedience charges. Now, the country’s airlines have also suspended all direct flights to Canada.

Ever since Prince Mohammed Bin Salman took over the kingdom’s foreign policy, Saudi Arabia has followed an aggressive policy towards many countries, especially its neighbours. Last year, Saudi Arabia severed diplomatic relations with Qatar, accusing the latter of embracing “various terrorist and sectarian groups aimed at destabilising the region”.’