American actor Mahershala Ali created history by becoming the first Muslim to win an Oscar. Ali beat Hollywood A-listers including Dev Patel (Lion), Lucas Hedges (Manchester by the Sea), Michael Shannon (Nocturnal Animals) and Jeff Bridges (Hell or High Water) to win the award for the best actor in a supporting role for Moonlight. His victory came as a refreshing change of an award ceremony that for long has been accused of racism. 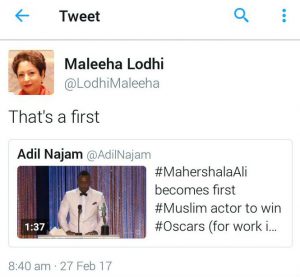 Pakistan envoy to the United Nations Maleeha Lodhi too took a notice of Ali’s victory as she retweeted a tweet that talked about his victory with the caption—’That’s a first’. However, the tweet was deleted from her Twitter handle soon after.

The reason for this sudden step is no brainer. Though Mahershala was raised with strong Christian influence, he converted to Islam and joined the Ahmadiyya community.

For those of you who don’t know Ahmadiyya, Muslims are considered as non-Muslims by law in Pakistan and have been persecuted over the years for being Kafirs or heretics. The group has been deprived of religious rights under the Second Amendment to the Constitution of Pakistan. The group has been subjected to severe atrocities over the years and has been the centre of several riots including the 1953 Lahore riots, 1974 Anti-Ahmadiyya riots and the attack in May 2010. 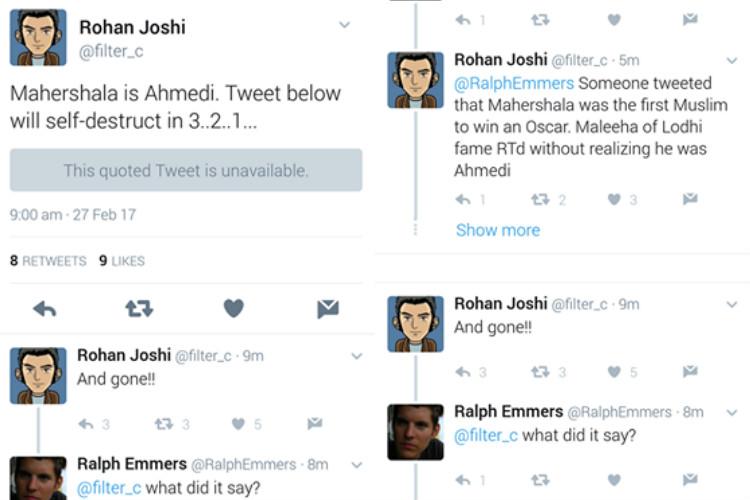 As the Pak envoy realised that Ali is an Ahmadiyya Muslim, she deleted her tweet inviting mockery over social media.

Ali played the role of a drug dealer Juan in Moonlight, who takes care of Chiron as he struggles to find his place in the world while growing up in Miami.