North Korea said Friday it conducted a “higher level” nuclear warhead test explosion, which it trumpeted as finally allowing it to build “at will” an array of stronger, smaller and lighter nuclear weapons. It is Pyongyang’s fifth atomic test and the second in eight months.

The North’s boast of a technologically game-changing nuclear test defies both tough international sanctions and long-standing diplomatic pressure to curb its nuclear ambitions. It will raise serious worries in many world capitals that Pyongyang has moved another step closer to its goal of a nuclear-armed missile that could one day strike the U.S. mainland.

Hours after Seoul noted unusual seismic activity near the North’s northeastern nuclear test site, Pyongyang said in its state-run media that a test had “finally examined and confirmed the structure and specific features of movement of (a) nuclear warhead that has been standardised to be able to be mounted on strategic ballistic rockets.” 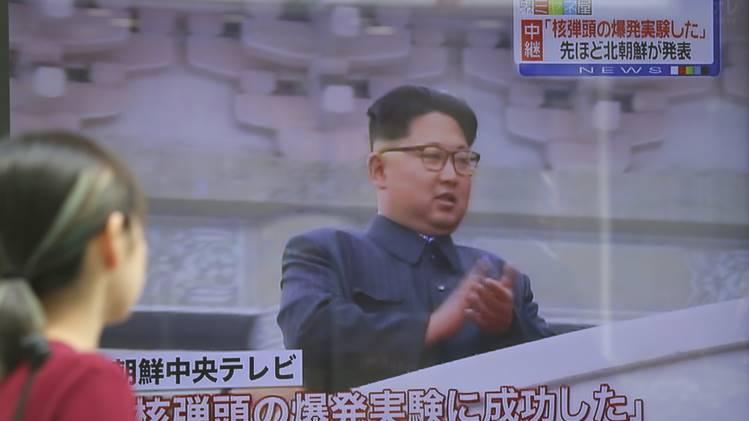 A woman looks at a TV screen showing a file image of North Korean leader Kim Jong Un during a news programme on the North’s nuclear test, in Tokyo. (Photo: AP/ Koji Sasahara)

“The standardisation of the nuclear warhead will enable (North Korea) to produce at will and as many as it wants a variety of smaller, lighter and diversified nuclear warheads of higher strike power with a firm hold on the production of various fissile materials and technology for their use. This has definitely put on a higher level (the North’s) technology of mounting nuclear warheads on ballistic rockets,” the country said.

South Korean President Park Geun-hye strongly condemned the test, saying in a statement that it showed the “fanatic recklessness of the Kim Jong Un government as it clings to nuclear development.” Kim is the North Korean leader.

Park’s office said she spoke with U.S. President Barack Obama about the test Friday morning, during a regional summit in Laos. Park said South Korea will employ all available measures to put more pressure on North Korea, which has previously conducted nuclear tests every three to four years.

North Korea said there was no radioactive material leaked, but the explosion put the region on edge.

South Korea’s Joint Chiefs of Staff said in a statement that “artificial seismic waves” from a quake measuring 5.0 were detected near the Punggye-ri test site. European and U.S. monitoring services also detected similar seismic activity, with the U.S. Geological Survey calling it an “explosion” on its website. 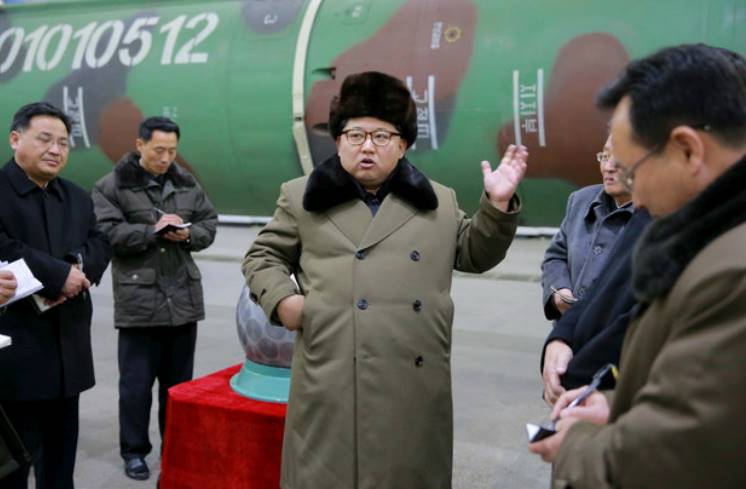 A South Korean Defense Ministry official, who refused to be named because of office rules, said that Seoul detected an estimated explosive yield of 10 kilotons. After the North’s fourth test, in January, South Korean lawmaker Lee Cheol Woo said Seoul’s National Intelligence Service told him that an estimated explosive yield of six kilotons was detected.

The 5.0 magnitude earthquake Friday is the largest of the four past quakes associated with North Korean nuclear tests, according to South Korea’s weather agency. Artificial seismic waves measuring 3.9 were reported after North Korea’s first nuclear test in 2006; 4.8 was reported from its fourth test this January.

North Korean leader Kim Jong Un has overseen a robust increase in the number and kinds of missiles tested this year. Not only has the range of the weapons successfully tested jumped significantly, but the country is working to perfect new platforms for launching them _ submarines and mobile launchers.

The longer ranges and mobile launchers give the North greater ability to threaten the tens of thousands of U.S. troops stationed throughout Asia.

The seismic activity comes on the 68th anniversary of the founding of North Korea’s government and just days after world leaders gathered in China for the G-20 economic summit.

Any test will lead to a strong push for new, tougher sanctions at the United Nations and further worsen already abysmal relations between Pyongyang and its neighbours. North Korea is already one of the most heavily sanctioned places on earth, and many questions whether the penalties work. 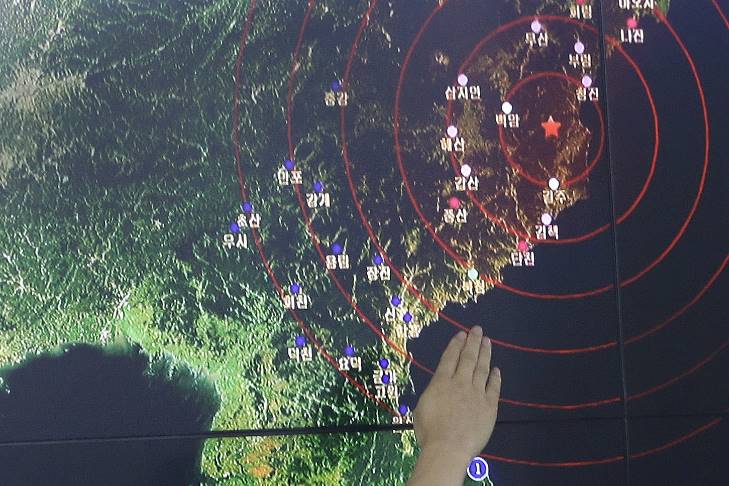 China, the North’s economic lifeline and only major ally, has previously offered cover to Pyongyang, though Beijing has expressed growing frustration with what outsiders call provocations.

“It seems that the North has decided to play an `end game’ where they push things to see how far they can go. It’s already being heavily sanctioned and there will be little room for any new sanctions that will meaningfully hurt them more,”  Koh said.

North Korea is thought to have a handful of rudimentary nuclear bombs and has spent decades trying to perfect a multistage, long-range missile to eventually carry smaller versions of those bombs.

After several failures, it put its first satellite into space with a long-range rocket launched in December 2012, and has since launched another satellite on a similar rocket. Experts say that ballistic missiles and rockets in satellite launches share similar bodies, engines and other technology.

Despite the North’s boasts Friday, it’s unclear whether the country has achieved the technology needed to manufacture a miniaturised nuclear warhead that could fit on a long-range missile capable of hitting the United States. Some analysts believe that it has the ability to arm shorter-range missile with warheads.

In January, North Korea claimed to have conducted a hydrogen bomb test, but many foreign governments and experts were sceptical about the claim. After that test, some analysts said the country likely needed only a couple more test explosions before acquiring a miniaturised warhead that could be mounted on a long-range missile.

North Korea’s persistent pursuit of missiles and nuclear weapons has long been one of the most intractable foreign policy problems for U.S. administrations. The most recent test comes ahead of U.S. presidential elections in November.

On Tuesday, North Korea fired three medium-range Rodong missiles that travelled about 1,000 kilometres (620 miles) and landed near Japan. And last month, a missile from a North Korean submarine flew about 500 kilometres (310 miles), the longest distance achieved by the North for such a weapon. This worried many South Koreans because submarine-based missiles are harder to detect before launch than land-based weapons.

Diplomacy has so far failed to stop North Korea’s progress. Six-nation negotiations on dismantling North Korea’s nuclear program in exchange for aid were last held in late 2008 and fell apart in early 2009, when North Korea was led by Kim Jong Un’s father, Kim Jong Il, who died in late 2011.

North Korea blames the United States and South Korea for its nuclear program, saying long-running “hostility” from Seoul and Washington to its government makes the development crucial for the small country’s survival.

Among Pyongyang’s regular demands are for Washington to withdraw its troops from the region and to sign a peace treaty formally ending the Korean War. It also wants recognition as a nuclear weapons state.

The Korean Peninsula remains technically at war, as the 1950-53 conflict ended in an armistice. Washington stations more than 28,000 troops in South Korea as a buttress against any North Korean aggression. Tens of thousands more are in nearby Japan.