Prime Minister Narendra Modi on Thursday advocated the strongest action against states that use terrorism as an instrument of state policy while outlining India’s principled stand on the South China Sea issue.

“We need to target not only the terrorists, but also their entire supporting ecosystem,” Modi said while addressing the 11th East Asia Summit here, the premier forum of the Asia-Pacific region.

“And, our strongest action should be reserved for those state actors who employ terrorism as an instrument of state policy,” he said without naming Pakistan. 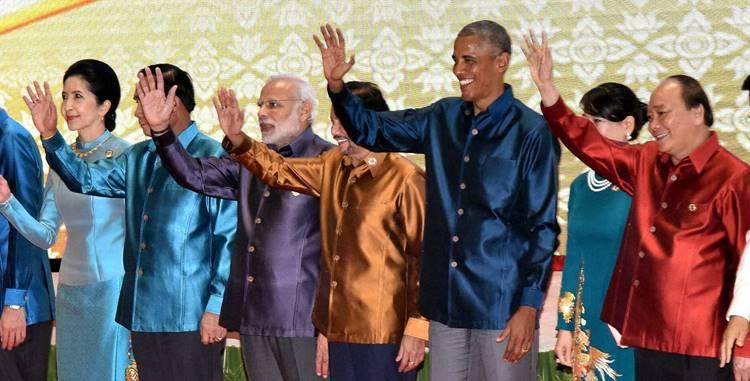 Stating that most countries in the South Asian region were pursuing a peaceful path to economic prosperity, he said: “But, there is one country in India’s neighbourhood whose competitive advantage rests solely in producing and exporting terrorism.”

India-Pakistan relations have soured in recent times following the killing of Hizbul Mujahideen militant Burhan Wani in Jammu and Kashmir in July. Pakistan described Wani as a “martyr”.

Over 70 people have died in large-scale violence in the state since then.

Stating that terrorism was the most serious challenge to open and pluralistic societies, Modi called for collective efforts to combat the scourge.

The Prime Minister said that India remained committed, including through membership of export control regimes, to pursuing total and verifiable elimination of weapons of mass destruction.

Since its inception in 2005 — India is a founding member — the East Asia Summit has played a significant role in the strategic, geopolitical and economic evolution of East Asia.

Elaborating on India’s principled stand on the South China Sea issue, he said that the lanes of communication passing through the sea were the “main arteries of global merchandise trade”.

“India supports freedom of navigation, over flight, and unimpeded commerce, based on the principles of international law, as noted in the 1982 United Nations Convention on the Law of the Sea (Unclos),” the Prime Minister said.

China is involved in disputes with littoral countries of the region over the South China Sea particularly over the Spratly and Paracel groups of islands.

In July, an international arbitration tribunal at the Permanent Court of Arbitration in The Hague ruled in favour of the Philippines in its dispute with China over the South China Sea.

While the Philippines welcomed it, China reacted angrily calling it null and void with no binding force and that “China neither accepts it nor recognises it”.

Modi said on Thursday that India believed “that the threat or use of force to resolve disputes would complicate matters affecting peace and stability”.

“As a state party to the Unclos, India urges all parties to show utmost respect for the Unclos,” he said.

Stating that countries have to be mindful of common security challenges, he said India would organise the second East Asia Conference on maritime security and cooperation later this year.

“We can share experience and build partnerships for protection of marine resources, prevent environment degradation and tap blue economy,” the Prime Minister said.

Earlier on Thursday, speaking at the 14th India-Asean Summit here, he said Asean was central to India’s Act East Policy while describing ties with south-east Asia as a “source of harmony”.

He said enhancing connectivity was central to India’s partnership with ASEAN.

In this connection, Modi proposed a joint task force on connectivity to work on extension of the India-Myanmar-Thailand trilateral highway to Cambodia, Laos and Vietnam.

Stating that cooperation in science and technology was a crucial element of India-Asean developmental engagement, he proposed to enhance the India-ASEAN Fund with an additional grant of $50 million.

He also invited the ASEAN leadership to be the guests of honour at the International Buddhist Conclave to be held in India in October.

Before leaving for New Delhi on Thursday afternoon, Modi held a meeting with US President Barack Obama in what could be the last bilateral between the two before the latter demits office in January next year.

At the East Asia Summit, he also had pull-asides with Chinese Premier Li Keqiang and Russian Prime Minister Dmitry Medvedev.