Until recently, a visit to the University of Farmington’s website would give the impression that the institute is a legitimate establishment that offers a wide range of courses for students. But the foreign students who enrolled in the college were in for a rude shock after being arrested by the US Department of Homeland Security, The Guardian reported.

US officials hatched an elaborate scheme to nab 161 foreign nationals. The authorities created a fake university with a staff of undercover agents with no classes or educators. Apparently, most of the arrested students are Indian and the US embassy in Delhi has been alerted for immediate access to the detainees. The Guardian report mentioned that Indian consular officials have visited 36 detention centres across the United States and a 24×7 helpline has been created for the students. 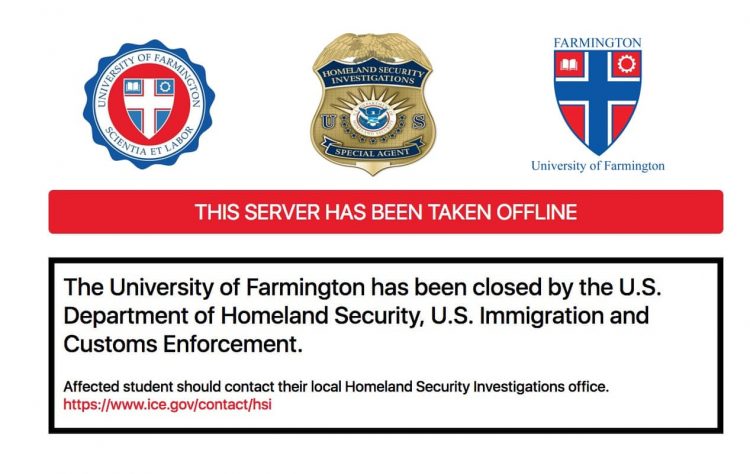 The indictment was opened on January 30, following which the US’ Immigration and Customs Enforcement (ICE) claimed that all the enrolled students (over 600 of them) ‘knew what they were getting into’. The office maintains that the students knew that they were not going to attend actual classes or earn credits. “Their intent was to fraudulently maintain their student visa status and to obtain work authorization,” the indictment said, according to the news portal.

However, attorneys and civil rights advocates have criticised this conclusion as some claim that it’s not entirely clear whether each student knew the outcome of enrolling into such a university. “ICE knowing this or DHS knowing this tries to ensnare as many people as possible and get them wound up in an immigration system where they know that the cards are going to be stacked against the immigrant,” Angelo Guisado, staff attorney at the Center for Constitutional Rights told The Guardian.

At the ThinkEdu Conclave 2019, The New Indian Express reported, Jayaram Komati, Special Representative for North America for the Government of Andhra Pradesh, addressed the issue: “More than 60,000 Indian kids come to the US for higher studies but not all of them face this issue. Why? Loopholes are found, accreditation is created. And students go through some consultancy and find such institutes, to help them shift to H1 visas from their F1 status easily. Lack of research and an easy way to come to the US is what is creating these problems.”

We’d call fraudulently jailing students on a visa to study a new low for the people-unfriendly Trump administration, but we’re pretty sure they hit rock bottom a while ago.