This year will go down in history as the first year since World War II that the Nobel Prize in Literature has been postponed. In light of a sexual abuse scandal in the Swedish Academy, the panel which bestows the honour has decided to not name a laureate this year.

The Washington Post reported that the announcement came days after the Swedish media reported that French photographer Jean-Claude Arnault – who was married to a member of the Swedish Academy – had groped the Swedish Crown Princess Victoria at an academy event in 2006. 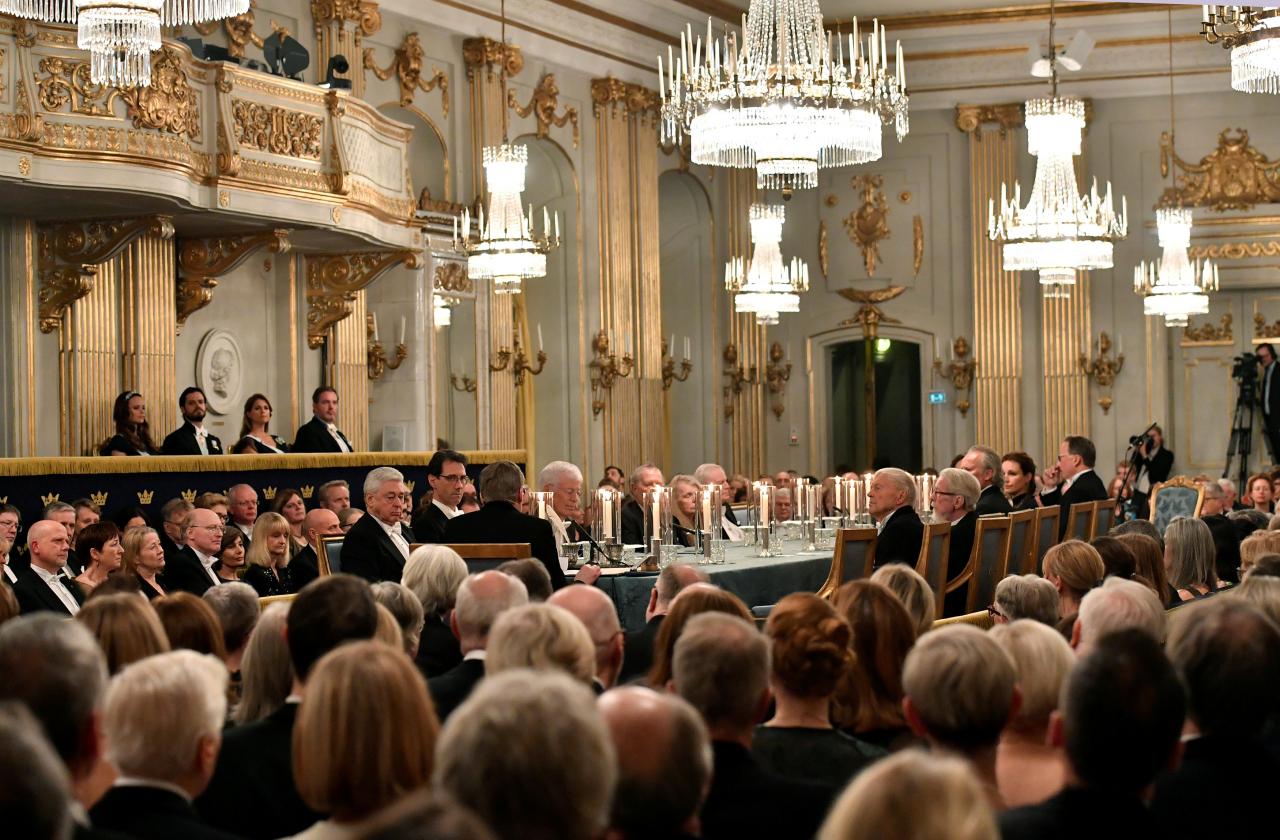 A general view of the Swedish Academy’s annual meeting in Stockholm. Courtesy: REUTERS

The academy said it would postpone this year’s award and will be naming two winners in the next year, however, the other awards will be given away as scheduled.  “The Swedish Academy intends to decide on and announce the Nobel Prize in Literature for 2018 in parallel with the naming of the 2019 laureate,” according to the statement. “The crisis in the Swedish Academy has adversely affected the Nobel Prize. Their decision underscores the seriousness of the situation and will help safeguard the long-term reputation of the Nobel Prize.”

Arnault was apparently accused of sexual harassment or assault by at least 18 women in November 2017. He had also allegedly disclosed the names of about seven Nobel prize winners. He has denied all the allegations.

The New York Times reported that following the scandal, the academy head Sara Danius, along with several academy members, had been dismissed. Danius’ removal as the first woman permanent secretary drew flak, as critics claimed she was “being punished for the misdeeds of a man”. Danius was apparently trying to introduce openness and accountability in a circuit which preferred “to keep close ranks”, the report highlighted.

Supporting the Swedish Academy’s decision to postpone the award, Carl-Henrik Heldin, Chairman of the Board of the Nobel Foundation, posted a statement on the NobelPrize.org website, saying, “The Nobel Foundation presumes that the Swedish Academy will now put all its efforts into the task of restoring its credibility as a prize-awarding institution and that the Academy will report the concrete actions that are undertaken. We also assume that all members of the Academy realise that both its extensive reform efforts and its future organisational structure must be characterised by greater openness towards the outside world.” 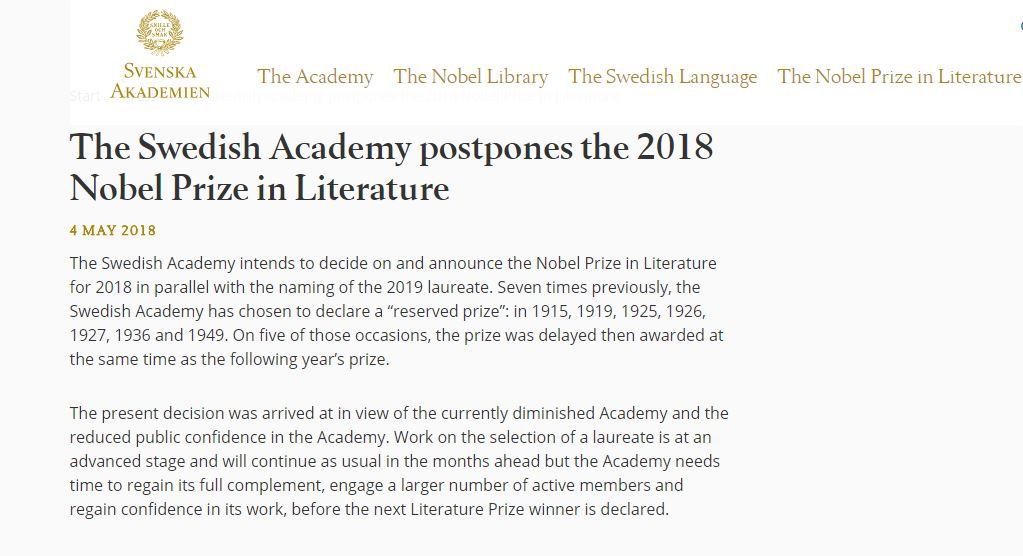 The statement put out by the Swedish academy. Courtesy: www,nobelprize.org

Academy appointments are for life

The appointments, however, are for life and the institution’s rules did not accommodate the possibility of an eventuality like this one. The resignation of 18 members due to the continued membership of Katarina Frostenson, the spouse of the accused, and the treatment meted out to Danius led to the several others stepping down from their respective posts.

This brought a disbalance in the academy’s panel, which was left with only 10 members – too few to elect new members, according to the rules. Soon after, the panel decided to postpone the awards this year and announce two winners in the next year.

This is how social media erupted after the news hit:

just give it to Donald Trump.. @realDonaldTrump
for his efforts

for not writing a book.

for writing a tax giveaway to rich to help the poor

RT @XHNews: Swedish Academy says it would not hand out #NobelPrize in Literature this year; plans to award double prizes next year

Swedish Academy cancelled Nobel Prize in Literature in 2018.Reasons?Not enough members to select a prize recipient.Why not? Head & 4 members resigned. Why? A member’s hubby was accused of sexual assault by 18 women. So?That member quit. Where is the hubby?Dunno. How old is he? 71

No Nobel Prize in Literature this year because the group in charge is too engulfed in a sexual harassment/assault scandal to give out the award. https://t.co/e8o8wM9FJj

#NobelPrizeToo: 18 women accuse the artistic director of Stockholm literary club of sexual assault + harassment. He has close ties to group that awards the Nobel Prize in literature. https://t.co/hzKdB2Kh3q

The #Nobel prize for #literature has been abandoned this year after the awarding committee was plunged into turmoil by infighting and resignations over a sexual assault scandal.https://t.co/cckjo1I8r4

Nobel prize in literature 2018 cancelled after sexual assault scandal Not even to Dylan? https://t.co/CkF2ZNywXD