At least 19 people were killed and 50 others injured in a suspected terror attack that took place at Ariana Grande concert in crowded Manchester Arena, which left hundreds of people fleeing in terror.

Greater Manchester Police confirmed the number of casualties in the explosions and said that the incident is being treated as terrorist attacks until further investigation.

According to reports, the initial theory was that a suicide bomber was behind the suspected terrorist attack at the Manchester Arena, with witnesses claiming to have heard an explosion around 10:40pm as a revellers, many young, were leaving.

Counter-terrorism officials are reportedly assessing what caused the explosion. Officers from the police and the domestic security service MI5 are also a part of the investigation.

NEW VIDEO: from inside the Ariana Grande concert when the bomb went off pic.twitter.com/gMGhOmtGGC

Eyewitnesses reported hearing a loud “bang” from inside the venue, which was playing host to a concert by American pop star Ariana Grande. Video footage from the scene showed bloodied victims being helped by emergency services.

Grande is safe, her spokesperson said. “It was one bang and essentially everyone from the other
side of the arena where the bang was heard from suddenly came running towards us,” an eyewitness said. 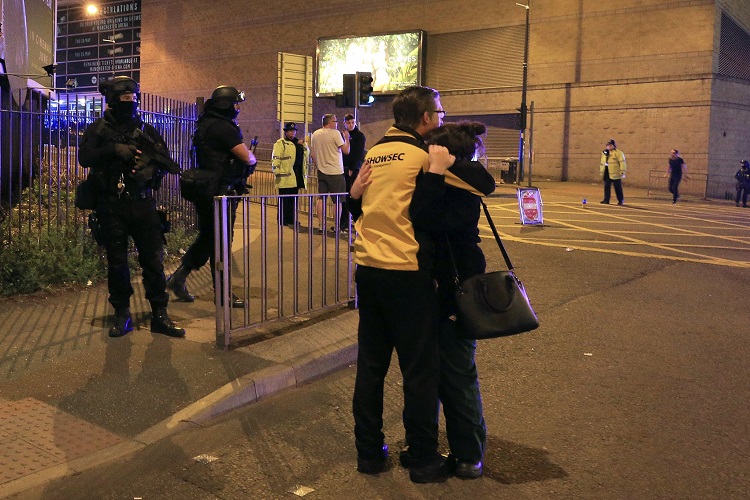 Armed police stand guard at Manchester Arena after reports of an explosion at the venue during an Ariana Grande gig in Manchester, England Monday, May 22, 2017. (Peter Byrne/PA via AP)

The UK’s Network Rail said train lines out of Manchester Victoria station, which is close to the concert venue, were blocked.

A concert by the American pop singer Ariana Grande was being staged at the time. Footage from inside the arena, which has a 21,000 capacity, shows a crowd containing many young revellers.

Earlier in March, four people and the attacker died after an attack on Westminster, central London, which targeted the Houses of Parliament.