What we know so far:

1:15 am: Canadian Prime Minister Justin Trudeau said that the “Canadians remain united with the people of the UK”. Meanwhile, French President Francois Hollande has said the “French government fleet” will take families of injured French children to London.

12:32 am: When the world was showing sympathy to the victims of the Westminster terror attack with the #PrayForLondon, Londoners start a Twitter trend #WeAreNotAfraid defiantly proclaiming that the terrorists haven’t won.

To the policeman who was killed today at Westminster protecting lives in our parliament, you are a true British hero. #wearenotafraid

#WeAreNotAfraid My heart goes out to all the people who went out this morning thinking it was gonna be ‘just another day’ #PrayForLondon pic.twitter.com/6C9onQZAlg

India strongly condemned the terrorist attack in London that reportedly killed four persons and injured several others, with MEA spokesperson tweeting that there is no place for terrorism in a democracy.

The Indian High Commission in London has called on any Indians injured in the Westminster terror attack to contact them for assistance and avoid traversing the Parliament Square in Britain.

11:35 pm: Scotland Yard, the headquarters of the Metropolitan Police Service, confirms four killed in the Westminster terror attack, including the police officer who was stabbed, the top anti-terror officer Mark Rowley has confirmed.

11:30 pm: Sean Spicer, the White House press secretary, said that President Donald Trump has spoken to Theresa May. “Our thoughts and prayers are with them,” he said.

11:23 pm: French Prime Minister Bernard Cazeneuve said via his tweet that French students have been hurt in the London attack. He expressed condolences with the British and offered support to the families and friends of the injured students.

11:09 pm: A woman was pulled alive from the River Thames beside the bridge where a major terror attack saw pedestrians hit by a car. However, she had suffered several injuries. 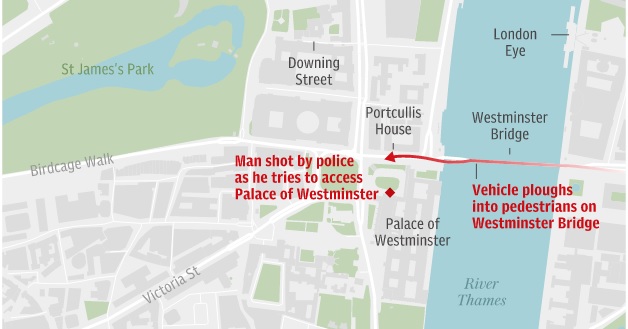 London attack suspect seen being taken away by paramedics as knives are left on the ground (circled) https://t.co/oiCGGVWrPq pic.twitter.com/jysJQUAVNN

11:01 pm: After the gruesome Westminster terror attack, the British Prime Minister May is to convene emergency security committee, the spokesperson said. Meanwhile, the police are treating the attack outside UK Parliament as planned by terrorists, however, the investigations are underway.

10:43 pm: “We stand ready to assist in any way the U.K. authorities would find helpful,” the U.S. State Department said. “Our hearts go out to those affected,” spokesperson Mark Toner further said adding that the United States Embassy in London is closely following the updates and is ready to help any affected Americans.

Armed police walk past emergency services attending to injured people on the floor outside the Houses of Parliament, London, Wednesday, March 22, 2017. London police say they are treating a gun and knife incident at Britain’s Parliament “as a terrorist incident until we know otherwise.” (Stefan Rousseau/PA via AP).

10:38 pm: After two days of debate on First Minister Nicola Sturgeon’s call for another referendum on leaving the United Kingdom, there were plans by the Scottish lawmakers to vote. The debate was halted midway after the members urged the House to do so out of respect for the policeman who was stabbed by the knifeman. 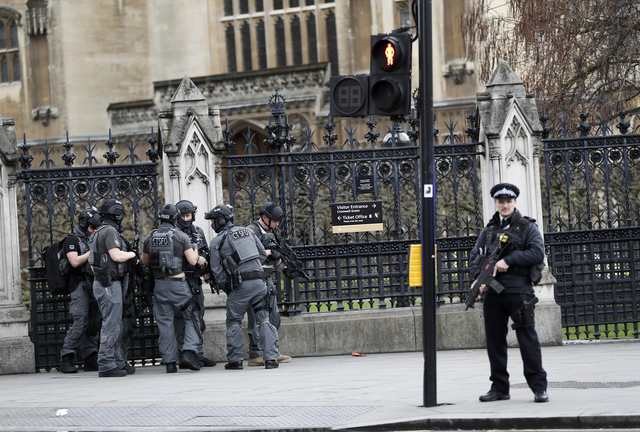 10:18 pm: Keith Vaz, British Labour party politician, told NDTV that about “400-odd MPs” have been “locked in a chamber in the House of Commons”. He further added that the doors have been sealed and they couldn’t get out from there. 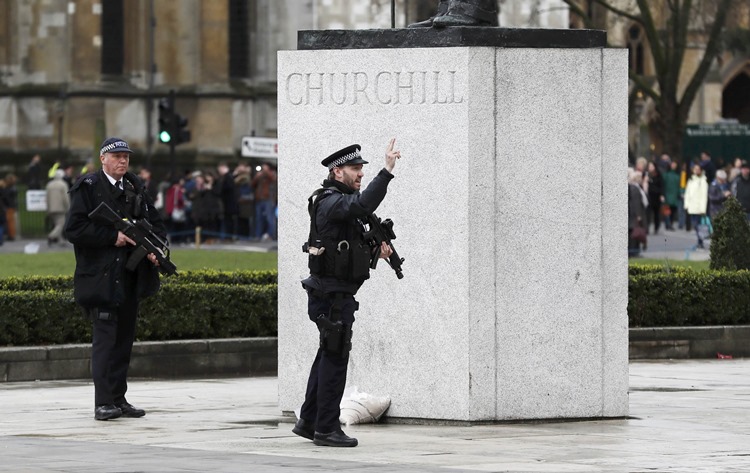 10:07 pm: After the terror incident at Westminster, the Buckingham Palace’s gates have been closed as a precautionary measure, CNN reported. 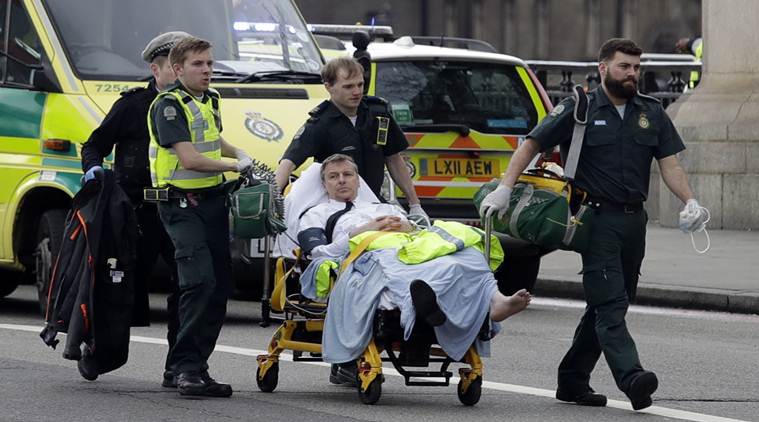 Emergency services transport an injured person to an ambulance, close to the Houses of Parliament in London, Wednesday, March 22, 2017. London police say they are treating a gun and knife incident at Britain’s Parliament “as a terrorist incident until we know otherwise.” (AP Photo/Matt Dunham)

9:57 pm: Meanwhile, the Metropolitan police has urged the people not to share pictures of those wounded in the incident.

9:45 pm: One woman has died and others have “catastrophic” injuries after terror attack on Westminster Bridge, a junior doctor at St Thomas’ Hospital tells The Telegraph.

9:40 pm: London Ambulance Service has “declared (the shooting at Palace of Westminster) a major incident” in a statement. “We have declared a major incident and our priority is to assess patients and ensure that they are treated and taken to hospital as soon as possible,” the statement read.

9:30 pm: Reactions to the horrific shooting outside the Palace of Westminster has got the attention of British politicians.

A car on Westminster Bridge has just mowed down at least 5 people. pic.twitter.com/tdCR9I0NgJ

9:15 pm:  CNN reports Member of Parliament Gerald Howarth saying that the incident “appears to be very, very serious indeed.” Meanwhile, the British police are investigating the multiple attacks as planned by the terrorists.

9:10 pm: There were multiple attacks outside the UK Parliament and a separate attack on Westminster Bridge. Meanwhile, the Scotland Yards is calling the incidents a terrorist attack. 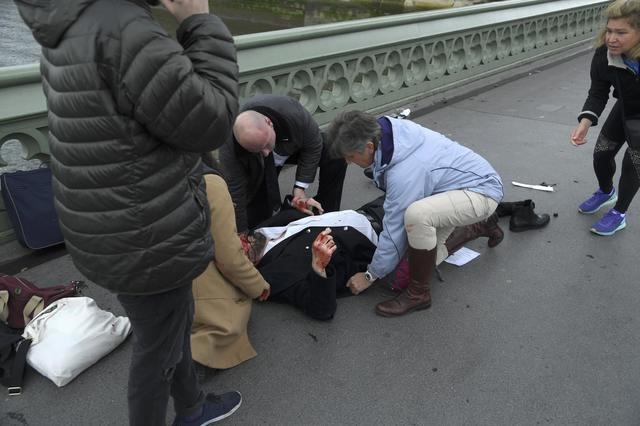 9:02 pm: As per the reports pouring in, a man was trying to break into the Palace of Westminster, but was shot dead by the police. The car, however, crashed on to the fence and ploughed into pedestrians, leaving several injured.

8:55 pm: BBC reports that Theresa May was ushered into a silver Jaguar car when a shot was heard at Parliament. However, quoting a source, they said that the UK Prime Minister was “OK”.

8:50 pm: The UK police have said via Twitter that it is being treated as a firearms incident and that they are on the scene. The incident occurred as parliament was in session. Proceedings in the House of Commons were suspended.

8:46 pm: BBC reported the Transport for London saying that the Westminster underground station has been shut at the police’s request.

8:40 pm: “There was screaming, shouting and about 100 people running…” a UK-based journalist, who was present at the scene, said via a periscope video.

UK parliament shooting: Minister says the alleged assailant has been shot by police at Parliament pic.twitter.com/DW9PCUQdsw

8:36 pm: At least four shots have been fired close to the Houses of Parliament in central London.