India’s eagerly awaited Republic Day parade this year will feature several of deadly combat aircraft of the Indian Air Force, with the home-built Tejas fighter jet a major attraction at this year’s parade.

With most of IAF’s aircraft fleet in middle of a major overhaul as the South Asian giant makes bold moves toward assembling its own fighter jets, this year’s Republic Day parade could possibly feature some of India’s long-standing fighter aircraft for the last time for the public to witness.

Here are 5 Indian Air Force (IAF) fighhter jets to watch out for this Jan 26:

The home-made Tejas aircraft features prominently in the Indian government’s plan to give the fighter fleet a revamped look.

It has been reported that 120 Tejas Fourth Generation Fighter jets will be inducted in the IAF’s frontline fleet in the coming days. They will reportedly replace MIG-21, which have been one of the mainstays of the Indian Air Force.

Tejas is reportedly a light combat, single-engine, multi-role supersonic aircraft weighing 8.5 tonnes and can fly at 1,350 km per hour. It is comparable to best fourth-generation jets in the world like French Mirage 2000 and American F-16. 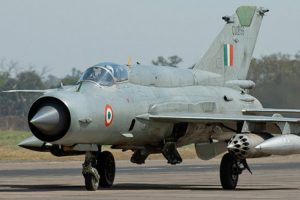 MiG-21 Bison fighter jets is the last remaining variant of Russian-made MiG-21, known to be one of the most produced aircraft in aviation history.

India has reportedly introduced more than 1,200 MiG fighters into its air force since 1963. However, a poor record of late with numerous MiG-21 crashes reported in the last decade or so, leading to death of 170 Indian pilots and 40 civilians, prompted the Indian government to start phasing these jets out. MiG-21 Bison is an upgraded version of the original MiG-21.

MiG-21 Bison will reportedly be replaced by home-built Tejas by 2022, according to news reports. 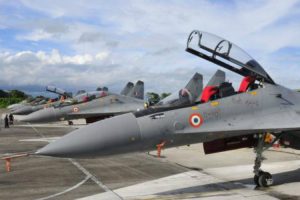 The IAF is known to possess 272 of the Russian-conceptualized Sukhoi-30 MKI which were being built in India by the state-owned aeronautics company Hindustan Aeronautics Limited (HAL).

Sukhoi-30 MKI is often said to be one of the most capable fourth generation fighter jets in the world, and gives India the ability to strike a nuclear blow deep into enemy territory.

Last year in June, a modified Sukhoi-30 MKI aircraft carried an air Brahmos-A supersonic cruise missile aloft for the first time which was seen as a significant milestone in country’s fighter aviation history.

India’s Sukhoi fleet will soon undergo a massive $8 billion overhaul as part of joint Russia-India collaboration. According to defense news websites, the upgraded Sukhoi Super 30 will nearly match the capabilities of fifth generation fighter aircraft (FGFA), the most technologically advanced of fighter jets in the world at present.

As part of the reported deal, the prototype will be built in Russia and then the bulk of the order will be manufactured in India. 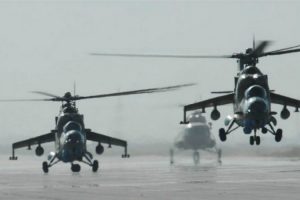 The Mi-35 attack helicopter is an all-weather assault aircraft that can carry out attacks at altitude as low as 10 to 25 metres during the day and 50 metres at night. It is the upgraded version of Russia-built Mi-24V choppers, which was used by the IAF during the Sri Lankan Civil War between 1987 and 1990 against LTTE (Liberation Tigers of Tamil Eelam) targets.

Mi-35 choppers are also believed to have been kept on stand-by while the Indian ground forces were carrying out surgical strikes on Pakistan’s terror camps last year. India is believed to be operating around a dozen of Mi-35 and Mi-25 choppers, both upgraded versions of Russian Mi-24 chopper.

However, the Indian government signed a deal with US-based Boeing last year to revamp its chopper fleet as it plans on introducing more advanced Apache helicopters to replace Mi-35s and its lower variants. 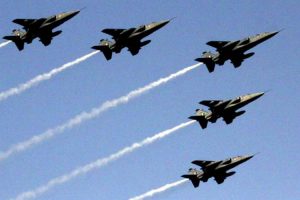 Originally a joint venture between the United Kingdom and France, Jaguar ground attack aircraft were first started to be built in India by the HAL in 2005, though India opted for an upgraded version.

The last remaining of vintage Jaguars retired from the UK’s Royal Air Force (RAF) in 2007, with the French Air Force retiring them a couple of years earlier in 2005. However, the IAF continued to manufacture upgraded versions of these planes. In March 2015, the IAF undertook a successful flight of upgraded Jaguar Strike aircraft with advanced capabilities.

It has been reported that India is developing a Advanced Medium Combat Aircraft (AMCA) which would replace Jaguar, so this Republic Day may well be the last time the public can catch Jaguar in action.